Two manuscript letters on a woman's trip from Virginia to Maine 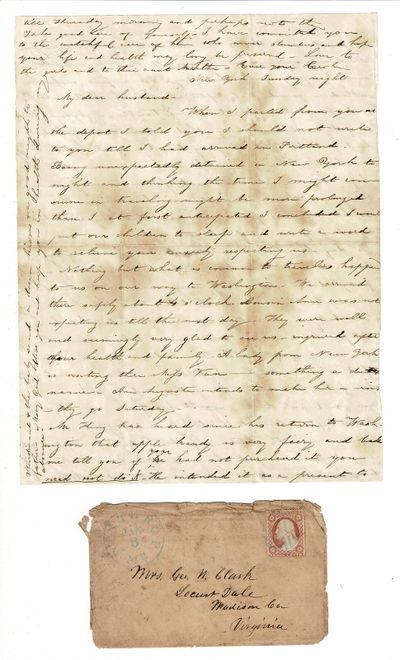 by Clark, Caroline
New York, 1851. Two letters from Caroline Clark to her husband George, concerning a trip she is taking from Virginia to her family home in Maine. She writes after being detained in New York for longer than anticipated to assure her husband that all is well. She travels with three of her sons, stopping at Baltimore before going on to Philadelphia, then New York. She plans to go on to Providence, then Boston, and finally to Portland by steamer. In her second letter she notes that her husband is anxious about her travelling without an "earthly protector," but was "very desirous to visit again the friends and scenes of my early youth. I wanted once more to gaze on the well remembered features of him to whom under God I owe my existence, my heart yearned once again to be with my sisters and hear kind tones and witness their affection." A third letter is from Caroline's brother to her, dated June 6, 1858. He updates her on the health of the siblings and their children, and speaks at length about his efforts to build a seminary in Maine, which when complete he expects to be "the most complete establishment of the kind in the state." All three letters are very good and legible. Accompanied by two postal covers, the first an embossed three-cent cover (Scott #U1) cancelled June 11 NY; it has edgewear with some loss to the emboss. The second is franked with a common 3-cent stamp (Scott #26) with a Winthrop Maine postmark and a circular killer cancel; it also has edgewear and soiling. Clark's second letter was sent coverless and has a 10c paid inscription above the address with a circular NY 10-cent postmark. (Inventory #: 57556)
$172.50 add to cart or Buy Direct from
Rulon-Miller Books
Share this item