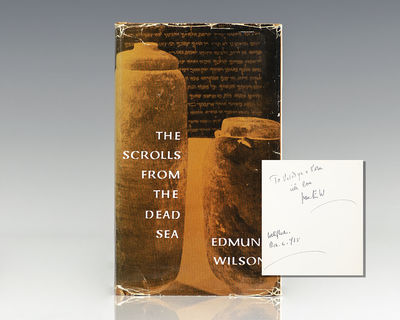 by Wilson, Edmund. [Vladimir Nabokov]
New York: Oxford University Press, 1955. First edition of Wilson's lucid account of the origin, discovery, and implications of the ancient Dead Sea scrolls. Octavo, original cloth. Association copy, inscribed by the author on the front free endpaper to Vera and Vladimir Nabokov, "To Volodya & Vera with love from EW Wellfleet Oct. 1955." Nabokov and Wilson were colleagues and close friends for over twenty-five years until the famous feud erupted between them due to Wilson's disparaging criticisms of both Nabokov's translation of Pushkin's Eugene Onegin and, subsequently, Lolita. He inscribed the present volume to Nabokov shortly after the publication of Lolita in Paris in 1955 and before it became a sensation in America in 1958. Nabokov's fame as a writer soon surpassed that of Wilson and their friendship was irreparably damaged. Near fine in the dust jacket which is in very good condition. With Nabokov's penciled question mark on p. 37 next to a comment on the failure of the Russian Revolution of 1905. From the library of Jason Epstein, Nabokov's editor at Doubleday, and Wilson's progeny in establishing the Library of America series. Edmund Wilson's critical works helped foster public appreciation for many of the foremost American writers of the 20th century including F. Scott Fitzgerald, Ernest Hemingway, John Dos Passos, and William Faulkner. He was the managing editor of Vanity Fair in 1920 and 1921, and later served as associate editor of The New Republic and as a book reviewer for The New Yorker and The New York Review of Books. An often harsh critic, he was also well known for his heavy criticism of J. R. R. Tolkien's work The Lord of the Rings, which he referred to as "juvenile trash", as well as his spiteful review of Vladimir Nabokov's translation of Pushkin's Eugene Onegin. (Inventory #: 119004)
$5,000.00 add to cart or Buy Direct from
Raptis Rare Books
Share this item