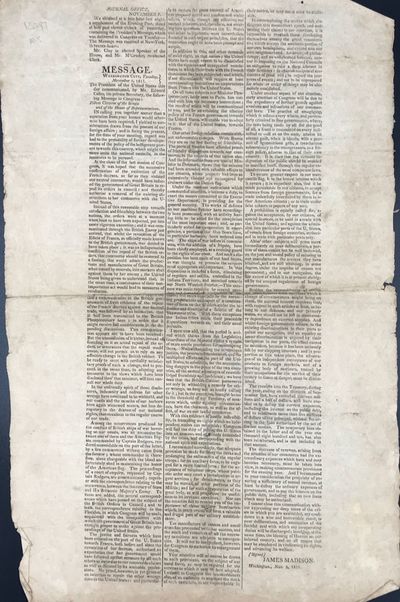 by Madison, James
NP [New York?]: Journal Office, 1811. Broadside, 45 x 28 cm., text printed in three columns. Signed in type by James Madison, Washington, Nov. 5, 1811. Paper toned, old fold lines, with rubbing and a few small holes along the folds, some shallow chipping to edges of the wide margins. An introductory paragraph, before the text of Madison's address, is headed "Journal Office, November 7" and reads: "We obtained at a late hour last night, a supplement of the Evening Post, dated at half past eleven o'clock of yesterday, containing the President's Message, which was delivered in Congress on Tuesday--- The Message was received at New-York, in twenty-hours. Mr. Clay is elected Speaker of the House, and Mr. M'Gruder, re-elected Clerk." In the course of his address, Pres. Madison discusses the conduct of both the British and the French toward American trade and the intimidation of American merchant ships: "With this evidence of hostile inflexibility, in trampling on rights which no independent nation can relinquish; Congress will feel the duty of putting the U. States into an armour, and an attitude demanded by the crisis, and corresponding with the national spirit and expectations." He mentions the recent confrontation between a British war ship and an American frigate commanded by Captain Rodgers. Madison recommends filling the ranks and extending the enlistments of regular troops, increasing the manufacture of cannon and small arms, ordering gun-boats and ships of war to patrol the American coast, etc. to protect American interests and revenue. (Inventory #: 65247)
$1,250.00 add to cart or Buy Direct from
Bartleby's Books
Share this item