NEW-HAMPSHIRE PATRIOT --- EXTRA. MONDAY, DECEMBER 8, 1828.... MESSAGE TO THE SENATE AND HOUSE OF REPRESENTATIVES 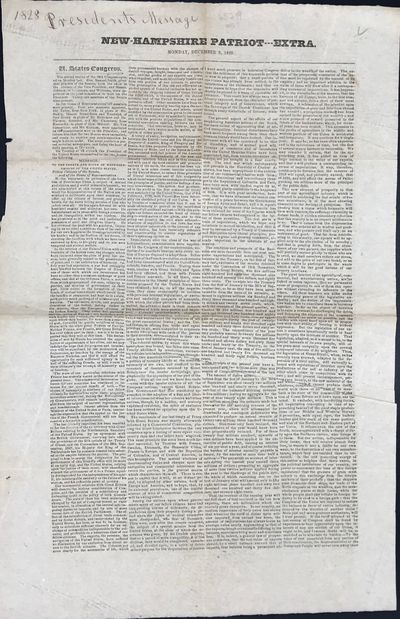 by Adams, John Quincy
[Concord, NH: New Hampshire Patriot, 1828. Broadsheet, 46 x 29 cm. [2] pp., printed in four columns. Old fold lines, slightly rumpled, manuscript note across top page margin, "1828 Presidents Message." Signed in type by John Q. Adams, Washington, Dec. 1st, 1828. The President addressed the second session of the 20th Congress, touching on foreign affairs and treaties, and the state of the economy, among many other issues before turning his attention to the provisions of the Tariff of 1828, enacted in May of that year which had come under criticism, especially in the southern states. Adams defends it: "The Tariff of the last session was, in its details, not acceptable to the great interests of any portion of the Union, not even to the interests which it was specially intended to subserve. Its object was to balance the burdens upon native industry imposed by the operation of foreign laws; but not to aggravate the burdens of one section of the Union by the relief afforded to another.... But if any of the duties imposed by the act only relieve the manufacturer by aggravation the burden of the planter, let a careful revisal of its provisions...be directed...." This address came shortly before Adams lost his re-election bid to Andrew Jackson. (Inventory #: 65249)
$1,250.00 add to cart or Buy Direct from
Bartleby's Books
Share this item