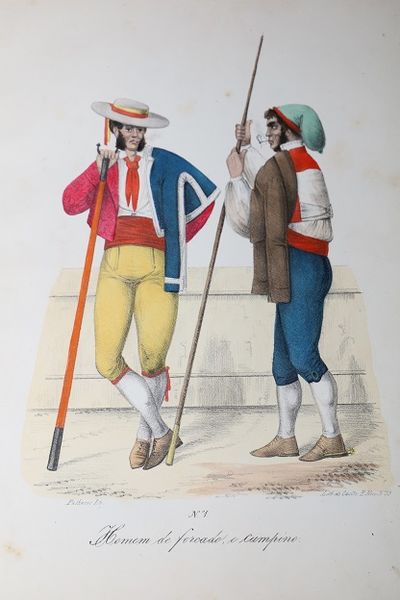 by Palhares, Joao
Lisbon: Lith. von Palhares. Hardcover. Pebbled cloth spine. Marbled paper on boards. . Very Good. 50 scarce hand-colored costume plates depicting Portuguese characters from all walks of life -- various classes, professions, and activities. N.d., mid-19th century. Brown has a collection of 60 plates from Palhares, not identical to these, all presumably from the Second Series, whereas these are from we believe the first and second series. The Brown plates also appear to be slightly smaller, which may only mean they were trimmed more. Otherwise, we could locate no other institutional copies of Palhares' color costume plates on OCLC First Search. Our collection was made, or held, in German hands, probably originally, and thus the handwritten title which we use as a matter of convenience -- there is no publisher's title to the compilation. The plates stand out from the standard national costume compilation of the day. Perhaps because these weren't created to be in a book, the individual plates tend to have a flair beyond the static display of clothing. So we see a woman with a basket of live hens on her head, a man carrying a ladder, a man strumming a guitar, etc. etc. Many of the illustrations show two people, which contributes to the dynamism of the presentation. We can almost hear these characters, and indeed, the imagery sings! And while the printed artwork does have a naivete about it, the color is especially vibrant. 4to. 30.5 by 23 cm. Condition: cover with moderate edgewear. Light foxing on many, but not all, plates. Occasionally the foxing is more pervasive and not so light. A few finger smudges in margins besides. Overall the soiling is not disconcerting, and the compilation remains attractive, as the imagery and coloring remains crisp and bright. (Inventory #: 006793)
$4,000.00 add to cart Available from
White Fox Rare Books & Antiques
Share this item
White Fox Rare Books and Antiques
Offered by