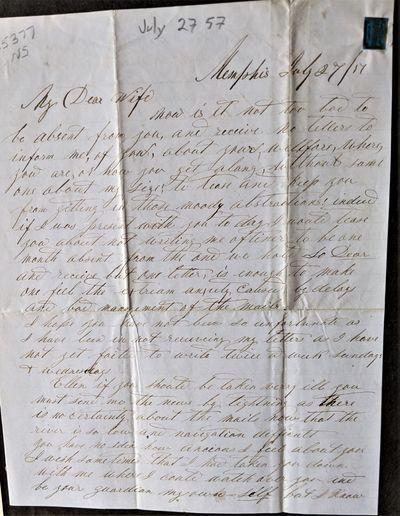 by Race & Slavery. McCallum, J.
Memphis, 1857. 4to. letter sheet.  250 x 195 mm., [9 ¾ x 15 ½ inches]. 4 pp. about 840 words. Folded in thirds.  Written in black ink faded brown in very legible hand.  J(esse) McCallum was a hay dealer from Cincinnati, Ohio, who travelled away from his family on business forays. In this case he writes from Memphis, Tennessee, complaining about the heat and commenting on the "darkies" as follows: "... the sun is scorching from 10 am to 4 pm the difference is very perceptible I think the heat is greater on account of the drought the ground is parched up and dry...the streets are deserted in the middle of the day but the darkies will be down in the hottest part of the day in the sun and sleep with the sun shining full in their face and appear to enjoy it as much as a white man would in the shade, what a difference collar (sic) makes...the south could not get along well without its black population one months work in the sun of the south would cure the bitterest abolitionist of the north of his bitter oposition (sic) to institutions of slavery and come over without a groan to be a slave owner if compelled to earn his living by cultivating the soil." McCallum thinks "we will do well on this load of hay...as hay is advancing" and also comments about his wife's lack of correspondence and reminds her that he writes twice a week. The last page is particularly affectionate--he remarks about being a "bachelor husband" and adds ; "... the only true enjoyment I have had was when I recd your letter since I left you, and now Elly, if you wish me to enjoy myself write often..." Jesse McCallum (often spelled Mc Collum in historical records) was born in Ohio in 1819. In 1850, he was working as a stone cutter. By 1860, he was living with wife, Eleanor Welsh, and  six children in Marysville, Yuba, California. In the Civil War he was a Union Corporal, 81st Illinois Infantry, Company A. In 1870, he was making "gas machines". He died in Marysville in 1880. (Inventory #: 708)
$375.00 add to cart Available from
De Simone Company
Share this item
De Simone Company, Booksellers
Offered by

Catalogue of the Dramatic Collection of the late Lucius Poole, Esq., of Boston

Boston : C. F. Libbie & Co. , 1905
(click for more details about Catalogue of the Dramatic Collection of the late Lucius Poole, Esq., of Boston)