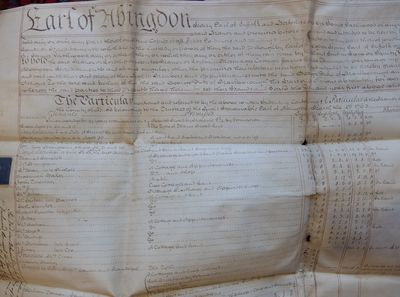 by WILLOUGHBY BERTIE, 4TH EARL OF ABINGDON (1740-1799)
1763. very good. British Music composer and patron of the arts; who later, as a political writer, rigorously defended the liberties of the American Colonies, in contrast to his close friend Earl of Suffolk. His brother-in-law introduced him to Johann Christian Bach and Carl Friedrich Abel and he was subsequently very involved in their careers. From 1791-1795 he became a patron of Franz Joseph Haydn and is often acknowledged as having contributed greatly to the composers success. In the political arena Abingdon was an outspoken critic of Lord North and his Administration yet denounced the French Revolution as "A threat to World Peace"; and argued that the abolition of the Slave Trade was the result of a "New Philosophy" inspired by the new French Republic. Toward the end of his life he became entangled with severe financial problems and subsequently died in poverty at age 59. Outstanding and historically important Document, a 1763 elephant-folio Deed, executed on vellum, 2 pages, whereby Abingdon and two of his close Political Allies, transfer the "Right-Title and Interest" in a considerable estate to The Duke of Marlborough, boldly signed: "Abingdon" Plus: British politician Henry Howard (1739-1779), better known for his role as the Earl of Suffolk, Secretary of State under Lord North, who secured Hessian and Hanoverian Mercenaries to help suppress the American Revolution, he signs this Document "Suffolk and Berkshire", and: Sir James Dashwood (1715-1779), who, in British National Politics supported staunch Anti-Catholic policies and, as a Tory member of Parliament moved swiftly to call for the Repeal of the Jewish Naturalization Act. He later called for the Repeal of the Plantation Act, which allowed for Foreign-born Protestants residing in any of the American Colonies, for a period of seven years, to be deemed to be one of his Majesty%u2019s %u201CNatural-Born Subjects%u201D, he signs this Document "Dashwood". All three would play a major role in influencing political and military policy during the American Revolution. Some frays with a minor separation at the folds. The signatures are boldly signed and in excellent condition. (Inventory #: 297908)
$1,200.00 add to cart or Buy Direct from
Argosy Book Store
Share this item

The Elements of Style

New York : Macmillan , 1959
(click for more details about The Elements of Style)
View all from this seller>