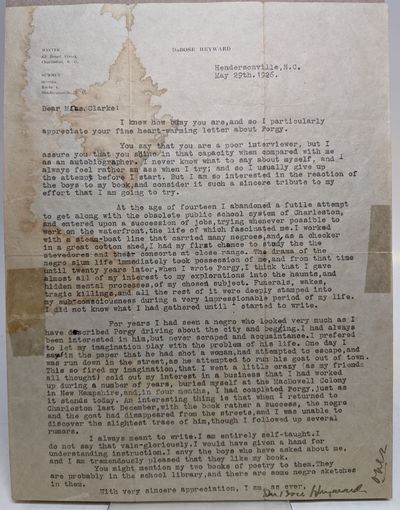 by HEYWARD, Dubose (1885-1940)
Hendersonville, 1926. very good. American author best known for his 1925 novel Porgy which would eventually be re-worked into the 1935 opera Porgy and Bess; a collaboration between Dubose, his wife Dorothy and composer George Gershwin. FIVE MONTHS AFTER RELEASING PORGY - - - DUBOSE WRITES TO A GRAMMER SCHOOL TEACHER AND DESCRIBES HOW HE CREATED THE BOOKS CHARACTERS! Exceedingly rare and historically important T.L.S., 4to. 1 page, personal letterhead, Hendersonville, North Carolina, May 29th 1926, in part: %u201C%u2026I know how busy you are, and so I particularly appreciate your fine heart-warming letter about Porgy. You say that you are a poor interviewer%u2026I never know what to say%u2026and I always feel rather an ass when I try. At age fourteen I abandoned a futile attempt to get along with the obsolete public school system of Charleston and entered upon a succession of jobs, trying whatever possible to work on the waterfront. I worked with a Steamboat line that carried many Negroes and, as a checker in a great cotton shed, I had my first chance to study the stevedores and their consorts at close range. The drama of the Negro slum life immediately took possession of me, and from that time until twenty years later, when I wrote Porgy, I think that I gave almost all of my interest to my explorations into the haunts, the hidden mental processes, of my chosen subject. Funerals, wakes, tragic killings, and all the rest of it were deeply stamped into my sub-consciousness during a very impressionable period of my life. I did not know what I gathered until I started to write. For years I had seen a Negro who looked very much as I have described Porgy driving about the city and begging. I had always been interested in him, but never scraped an acquaintance. I preferred to let my imagination play with the problem of his life. One day I saw in the paper that he had shot a woman, had attempted to escape, and was run down in the street, as he attempted to run his goat out of town. This so fired my imagination, that I went a little crazy (as my friends all thought), sold out my interest in a business%u2026buried myself at the MacDowell Colony%u2026 and in four months %u2013 I had completed Porgy, just as it stands today. An interesting thing is that when I returned to Charleston last December, with the book rather a success, The Negro and the goat had disappeared from the streets, and I was unable to discover the slightest trace of him, though I followed up several rumors. I always meant to write. I am entirely self-taught. I do not say that vain-gloriously. I would give a hand for understanding instruction. I envy the boys who have asked about me, and I am tremendously pleased that they like my book%u2026%u201D CONDITION: There are two water stains at the top half of the letter extending to the margin. Also: two small tape remnants appear at the left and right margin. The good news is that neither flaw detract or obscure any of the content and restoration is an affordable option. One of the most candid and historically important letters by Dubose Heywood ever to come to market! (Inventory #: 297905)
$5,000.00 add to cart or Buy Direct from
Argosy Book Store
Share this item