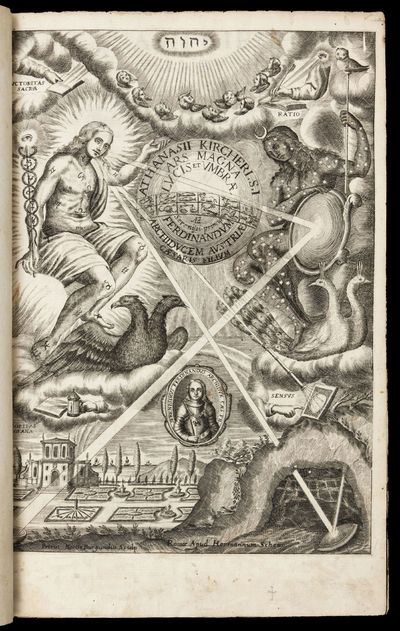 by KIRCHER, Athanasius
Folio [20 x 30.5 cm], (20) ff., 935 (1) pp., (7) ff., without final blank, including engraved frontispiece and with 40 engraved/etched plates, 35 numbered, 5 unnumbered, of which 1 is large and folding, including hundreds of woodcut diagrams and illustrations in text, a few of which are white on black. Bound in 18th-century Spanish calf over boards, spine renewed à l'antique, with calf corner pieces, all edges gilt, block-printed endpapers. Rubbing and edge wear to spine and boards, joints tender at extremities, bookplate of Pier Paolo Vaccarino inside upper cover. Ownership inscription "Franc: Ensebii(?) Comitis de Röttingen(?) 1650" on title, very minor worming in first few leaves, occasional minor marginal and minor toning, a few plates misbound but all present, a few plates trimmed close to plate mark, plates in fine, dark strikes. Generally very good.
First edition of the Jesuit polymath Athanasius Kircher's (1602-80) extraordinary, extensively illustrated work on 'optics' in the most capacious sense, which discusses in detail shadow, color, refraction, projection, distortion and luminescence, vision, the eye, illusion, lens, instrumentation, automata, natural wonders, the very nature of images, etc., and also provides early descriptions and depictions of the camera obscura and magic lantern, the precursors of the film camera and the motion-picture projector. The work also contains a section on cryptography in which messages are written backwards and decoded using mirrors and candlelight. The imaginative range of Kircher's program of illustrations is rarely rivaled among early modern books.

Kircher's interest in the camera obscura ultimately derived from his preoccupation with natural magic, but his model is nevertheless considered technically important by Hammond for the evolution of the instrument's design. It consisted of two camerae at 180 degrees to one another, with an outer box with a hole at two opposite sides. Inside is another box covered with translucent paper which allowed a draughtsman within to see an image on two sides. Hammond also notes the partial similarity to a model designed by Robert Hooke (Hammond, The Camera Obscura: A Chronicle).
"Kircher's theory of color was at root Aristotelian and Aguilonian in type. His diagram of the color scale was clearly based upon Aguilonius, with the same principal arcs, suggesting that color makes musical harmonies in the eye like 'the diapason in the ear.' Kircher has amplified the Aguilonian scheme by introducing the mixtures of the 'median colors' with black and white, but the basic pattern is identical, relying upon the white and black poles which become yellow, red and blue together with the three 'composites', orange, green and purple. A more significant extension to Aguilonius' ideas is provided by a series of analogies which Kircher outlined in the table below the diagram. Unlike his predecessor, Kircher was much given to astrological mysticism of the type which Lomazzo had adopted from Cornelius Agrippa, and throughout his book, Kircher weaves a complex web of cosmological concordances for visual science" (Kemp, Science of Art, p. 280ff., for speculations on similarities between Kircher's theory and Nicolas Poussin's practice).
*Brunet, III, 666; Caillet, II, 360.5770; De Backer & Sommervogel, IV, cols. 1050-59; Merrill, Kircher, 7; Vagnettti EIIIb42; Vitry, 48; D. D. Schulman, An Annotated Bibliography of Cryptography, p. 12; Linda Hall Library, Jesuit Science, 10; Kemp, Science of Art, pp. 191 (camera obscura); Harvey, Luminiscence, pp. 103ff; J. H. Hammond, The Camera Obscura: A Chronicle; collated against Deutsches Museum copy. (Inventory #: B5898)
$9,500.00 add to cart Available from Martayan Lan
Share this item
Martayan Lan, Inc.
Offered by