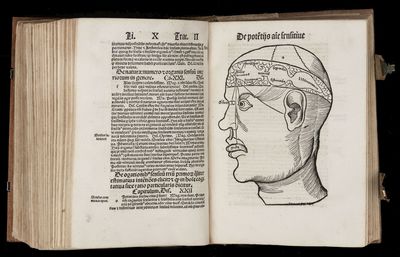 by REISCH, Gregor
Large 4to [21.3 x 15.1 cm] (316) ff., including woodcut title, 19 full-page woodcuts, some 40 half- to quarter-page woodcuts in text, as well as numerous geometrical diagrams, alphabets and staves of music, and with 2 folding woodcut plates, and the world map, which apparently is supplied given that worming not continuous. Quarter bound in contemporary blind-stamped pigskin over wooden boards, manuscript title label on spine, upper board replaced at a later time, original brass clasps on pigskin straps present on lower board, manuscript waste reused in binding including vellum stays of a 9th-century(?) Latin manuscript, spine liners of a 15th- or early-16th printed German-language text, and pastedown of a 15th century Latin manuscript in a cursive hand. Minor rubbing and edge wear to spine and boards, lower board with a small split, bookplate of Thomas Vroom inside upper cover. A few contemporary annotations, ownership inscription "Ph[illipu]s Tengnagell 1600" on title page (see below), some worming in initial quires generally in margin, but extending into printed surface, grazing partial letters but never putting sense in doubt; toning and occasional fingersoiling in outer margin but generally an extremely fresh, internally unsophisticated copy, excellent.

Fine copy of a scarce 1508 third edition (first 1503, second 1504) of "the first modern encyclopedia to appear in print" (Smith, Rara Arithmetica, p. 83). Written in the popular didactic form of a Latin dialogue between master and pupil and enriched with an extensive program of (very lively) woodcuts, the work sought to summarize the whole of extant knowledge, forming a compendium of the quadrivium, trivium and natural sciences. The range of subject matter is so wide that there is hardly any subject on which it does not touch in a way that, owing to the earliness of the date, is historically significant.
The illustrations of the Margarita Philosophica are of great interest to the history of woodcut book illustration, combining allegorical representations of sciences well known in manuscripts and incunables with the prosaic (but more important) depictions of objects under discussion. The work's early date allows it to claim a number of firsts, most famously the oldest printed depiction of the human eye (Choulant/Frank), an early depiction of the brain, and a very early, if not the earliest depiction of a child holding a hornbook. Included are twelve sections on grammar, dialectics, rhetoric [the 'trivium'], arithmetic, music, geometry, astronomy and astrology [the 'quadrivium'], natural philosophy (science), the origin of things, powers of animal sensation, powers of the animal intellect, and moral philosophy. The work achieved its influence both by presenting information in a comparatively new and accessible form and through its fine illustrations, of which there are many full-page, folding and textual.
"From all accounts it was one of the most widely read textbooks for university students … The earlier editions of the Margarita contain a Ptolemaic world map … decoratively enlivened by twelve individually characterised windheads, of which one – Vulternus – is seen peering through a pair of spectacles. A caption across the traditional spit of land adjoining Africa to Asia acknowledges (in Latin) the disappearance of the classical world concept: 'Here is not land but sea, in which there are such islands not conceived by Ptolemy.' The text of the book contains no further allusion to this piece of information and it is unclear whether the reference is to the discovery of the sea route to India, or to the finding of the West Indian islands by Columbus of both" (Shirley, p. 21).
Reisch was a Carthusian prior at Freiburg, serving as rector of the University and was also confessor to the Emperor Maximilian. Written in the 1490s, the first edition of the Margarita Philosophica was published in 1503. A pirate edition by Grüninger followed the next year, as did the proper second edition by Schott. The edition offered here is considered third by Ferguson (and is referred to as such in the colophon), and has the same woodcuts as Schott's second edition, with the following exceptions: a brand new title, possibly created to distinguish the present edition from the intervening pirate; the woodcut of the Baculus Jacob on f. q5v is new, the bath on f. C6v is new, and the Campus Gloriae is omitted.
An ownership inscription at the foot of the title page reads "Ph[illipu]s Tengnagell 1600." Phillip Tengnagell and his brother Gregor were jurists in Speyer. Gregor's books were inherited by Philipp and afterwards passed through the Helfenstein library to the Fürstlich Fürstenbergische Hofbibliothek Donaueschingen, in its heyday one of the largest aristocratic libraries in Germany. The collection was largely dispersed between 1980 and 2001.
*J. Ferguson, 'The Margarita Philosophica of Gregor Reisch,' The Library, 4th series, vol. X pp. 197-201; VD 16 R-1036; not in Adams; Smith Rara Arthmetica, pp. 83-4 (misreporting 309 ff.); Fairfax Murray (German) 364 on woodcuts (1517 ed.); Thorndike V.139-41; Simon, Bacchica 560-61; Shirley, Mapping of the World, p. 21, no., 22. (Inventory #: B5894)
$38,500.00 add to cart Available from Martayan Lan
Share this item
Martayan Lan, Inc.
Offered by