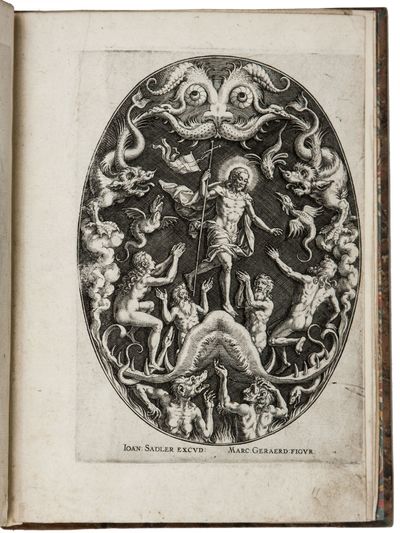 by GHEERAERTS, Marcus the Elder / SADELER, Jan I
GHEERAERTS THE ELDER'S GROTESQUE SUITE OF ENGRAVINGS DEPICTING SCENES OF CHRIST'S PASSION

8vo, (1) engraved title page and (13) full-page engravings, and extra illustrated with additional (4) engravings from other suites. Quarter bound in 19th-century calf and marbled paper boards, gold-stamped lettering piece laid to spine, marbled end papers. Only minor edge wear to boards, joints tender. The suite of engravings in fine, dark strikes, with only the occasional minor stain; two of the additional engravings (Labors of Hercules) are trimmed, laid down and carry later annotations in pencil.

Rare first and only edition, only state, of a suite of 14 full-page, 16th-century engravings which ingeniously refigure the traditional subjects of Christ's Passion in a manner at once timely/fashionable and archaizing/antique. The Passio verbigenae, published by Jan Sadeler I (1550-1600) after the designs of Marcus Gheeraerts the Elder (c. 1520-c. 1590), depicts scenes occurring between Christ's meditation on the Mount of Olives and his Resurrection, each presented in the manner of ancient Roman grottesche, a form widely popular in Renaissance and Mannerist art following the rediscovery in the late 15th-century of grotesque frescos at Nero's Domus Aurea in Rome. The symmetrical, exquisite, obscure, delicate and often bizarre nature of this style suited the Mannerist tastes of Flemish printmakers in the late 16th century. Here, however, Gheeraerts and Sadeler use the style not for weird or frivolous ancient iconography, but instead to recount the most central and important story of Christianity, the Crucifixion of Jesus and his triumph over death. In this case it is likely that Gheeraerts and Sadeler saw the grotesque mode as a historical form dating from the time of Christ which conferred authenticity to the subject matter. In this way the suite of engravings is both a fine curio and a document participating in the new movement of Early Christian archeology which rose to prominence in the decades before 1600.
The suite's engraved title page and 13 full-page engravings are arranged in an oval frame as quasi-symmetrical compositions with a principal iconographic moment from the Passion in the upper-middle register and an ancillary scene below. The title page shows the Arma Christi (or Instruments of the Passion) surmounting death/demons, with Latin verse by Favolius at the bottom (the attribution to Favolius, "D. Favol: canebat," has been abraded in the present example). The principal plates depict the Last Supper (with, as the ancillary scene, Judas receiving thirty pieces of sliver), Agony in the Garden (Judas and soldiers enter garden), Judas embracing Jesus leading to his arrest (Simon Peter cuts off ear of Malchus), Christ before Caiaphas (the Denial of Peter), the Flagellation (tormentors bind sticks for flogging), Crowning with Thorns (Christ given reed), Ecce Homo (mocking of Christ); Christ carrying Cross (Instruments of the Passion), Soldiers take Christ's cloak and prepare him for Crucifixion (soldiers dig post hole for Cross), Crucifixion (soldiers roll dice over cloak), Descent from Cross (tomb sealed), Harrowing of Hell (demons in Hell), and the Resurrection (soldiers at tomb).
The present volume was extra illustrated by an early collector with 4 further grotesque plates designed by Gheeraerts. These are (1) the Ignis (Fire) plate from the Four Elements series published by Philips Galle, (2-3) Hercules fighting Hydra and Hercules afflicted by the Cloak of Nessus, from Gheeraerts' suite of the Twelve Labors of Hercules, and (4) Hercules drawing his bow against the Centaur Nessus who is absconding with Deianeira, from the 'Ornaments for goldsmiths in squares, octagons and lozenges' suite by Gheeraerts and Galle.
Complete suites of the Passio verbigenae are very rare, with OCLC locating U.S. examples only at the National Gallery of Art and the Metropolitan Museum of Art; the Blanton Museum of Art (Texas) holds a partial suite.
*Ornamentprenten in het Rijksprentenkabinet, 85; Hollstein, Dutch and Flemish etchings, engravings, and woodcuts, c. 1450-1700, v. 7, p. 102, nos. 87-99; SKB 230; Foulc 544; Jessen 289; E. Hodnett, Marcus Gheeraerts the elder of Bruges, pp. 60-61, 72. (Inventory #: 5934b)
$7,500.00 add to cart Available from Martayan Lan
Share this item
Martayan Lan, Inc.
Offered by