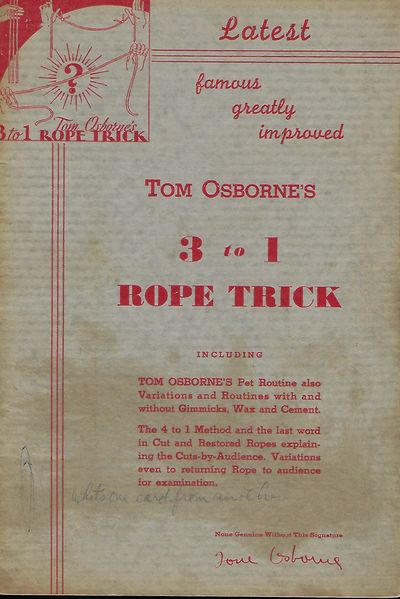 by OSBORNE, Tom
[Philadelphia]: Kanter's Magic Shop, 1938. First Edition. Signed presentation from Osborne to magician Mystic Craig on the title page: "To my dear good friend Mystic Craig-Tom Osborne." Thomas James Osborne [1902-1963] had two television programs "Magic Made Easy" and "Black Magic" in Philadelphia in 1957 and 1958, possibly becoming the first magician to appear on TV. Magician Max Holden once called him "one of the greatest showmen in magic." He contributed many articles and Hocus Pocus Parades to the "Linking Ring" magazine. Osborne is known for his marketed version of the Three-To-One Rope, invented by Carlyle (Lyle Laughlin). Mystic Craig [1900-1987] was a professional magician who was known for taking early movies of many magicians. He traveled the world and using expensive sound equipment, he shot thousands of feet of color 16mm color film of magicians. He donated his complete film library of magicians to the William Larsen Sr. Memorial Library of the Academy of Magical Arts, located in the Magic Castle in Hollywood, California. In appreciation of that gift, the Academy of Magical Arts bestowed on him the Honorary Life Membership. Osborne's autograph is uncommon and this is a wonderful association copy!. 8vo., printed gray wraps, stamped in red; 16 pages. Illustrated.. Very Good (lower portion of front cover with a light exterior stain; contents clean & tight). (Inventory #: 57180)
$85.00 add to cart or Buy Direct from Antic Hay Books
Share this item
Antic Hay Books
Offered by

WRITTEN PRODUCED AND DIRECTED BY OLIVER DRAKE: AN AUTOBIOGRAPHY. 50 YEARS WITH HOLLYWOOD'S GREAT WESTERN HEROS AND OTHER STATRS

[Baldwyn, Mississippi : The Outlaw Press Inc. , 1990
(click for more details about WRITTEN PRODUCED AND DIRECTED BY OLIVER DRAKE: AN AUTOBIOGRAPHY. 50 YEARS WITH HOLLYWOOD'S GREAT WESTERN HEROS AND OTHER STATRS)