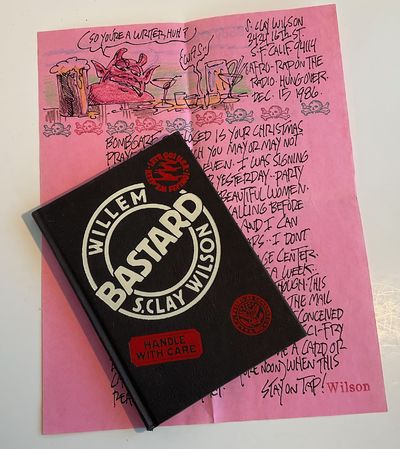 by Willem and S. Clay Wilson
4.5 x 6.25", 33pp, full black leather-patterned boards stamped in red and pale gray. Illustrated endpapers and underground style comics by S. Clay Wilson in black and white. Inscribed to Wilson's friend, Don Baumgart, with holographic letter laid in, headed by an original hand colored drawing of the devil in a barroom and written on the back of a photocopied article about men's pheromones and women's menstrual cycles. The book includes testimonials to Wilson and his work by Charles Bukowski and William S. Burroughs, with reproduction signatures dated 1984. Bukowski's includes several reproduced doodles. Willem's short introduction is in French, but the actual graphic novel format by Wilson is in English, with his usual nudity and outrageous and explicit sexual references. Edition size is unstated but unlikely to be large.

Baumgart worked for Rip Off Press, the long-running underground comics publisher of Wilson's work and notably The Fabulous Furry Freak Brothers by the co-founder of the press, Gilbert Shelton. Baumgart was likely working there and living in San Francisco at the time Wilson inscribed this to him. Baumgart later moved to Nevada City, home of Air Pirates co-creator Dan O'Neill, and worked for Bud Plant Comic Art for several years. Fine, a scarce association copy. Issued without dust jacket. (Inventory #: 27866)
$1,250.00 add to cart Available from
Bud Plant & Hutchison Books
Share this item

Please allow for 7.0375% state sales for shipping within California. Books are returnable for any reason if we are notified of intent to return within 5 days of receipt.
More from this seller

London : Franfrolico Press , 1926
(click for more details about Earth-Visitors: Poems by Kenneth Slessor)
View all from this seller>