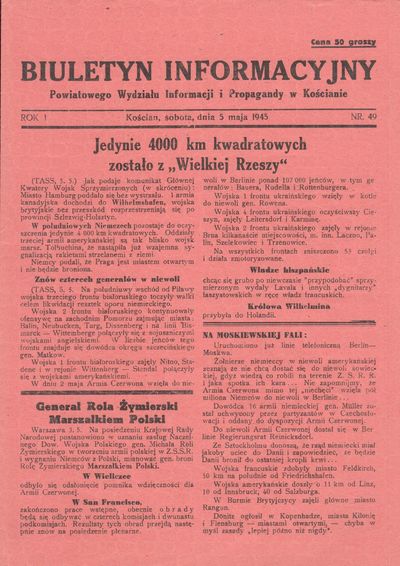 by Bukowiecki, Leon, editor
Kościan: Powiatowy Wydział Informacji i Propagandy, 1945. Quartos (30 × 21.5 cm). Original folded leaves, some single leaves, printed to rectos and versos; [2-4] pp. per issue. Printed on stock of varying color. Very good. Eight issues of this daily publication by the Red Army, distributed in the last two months of World War II, in April and May 1945, and printed in the village of Kościan, near Poznań, in Western Poland. Kościan was occupied by Germans in 1939, with many public executions carried out, including the mentally ill and elderly. The Red Army took over in January 1945.The title harkens to a well known Polish underground resistance publication of Armia Krajowa (the Home Army), published November 1939-January 1945. The issues announce the progress of the Red Army and the Allied forces with articles titled "The American Army near Magdeburg!" and "Crossed the Danube into Vienna!" They document the daily progress of the Eastern front, with various conquests, arrests, surrenders, and executions. Edited by Leon Bukowiecki and Stefan Migdalewicz and printed under the auspices of the Ministry of Information and Propaganda.Likely due to it being an organ of Red Army officers, the journal is not listed in Centralny katalog polskiej prasy konspiracyjnej 1939-1945.As of October 2020, KVK and OCLC show no copies outside of Poland (where it only appears to be held at Poznań). (Inventory #: P5712)
$275.00 add to cart or Buy Direct from
Bernett Penka Rare Books
Share this item