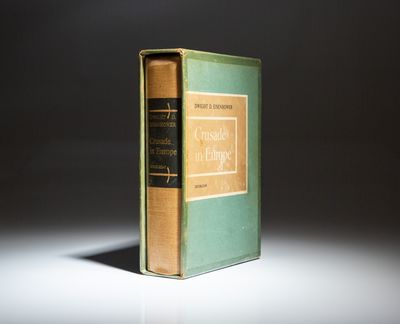 by Eisenhower, Dwight D.
Garden City: Doubleday & Company, 1948. First Edition / Limited Edition. Cloth. Fine/near fine. Signed limited edition of Crusade in Europe by Dwight D. Eisenhower.. Octavo, [xiv], 559pp, tan buckram, gilt title over black on spine. Illustrated endpapers. Top edge gilt, uncut edges. In original glassine jacket, with light toning to spine and some wear along top edge. Previous ownership stamp on front endpaper. In publisher's slipcase, reinforced at hinges with tape repairs and some staples, very stable. This book is a limited edition of 1426 copies signed by President Dwight D. Eisenhower. This is number 965 of 1426. From the collection of the Honorable Donnald K. Anderson, Clerk of the US House of Representatives from 1987 to1995. Mr. Anderson was a longtime resident of Capitol Hill, where he worked in the House of Representatives from 1960 to 1995. He was baptized Catholic in 1979, with his Godparents being an illustrious group, including Tip O'Neill, Dan Rostenkowski and John W. McCormack. He died in 2020. (Inventory #: 10295)
$3,800.00 add to cart Available from
First Edition Rare Books
Share this item

New York : Published by J.P. Giffing at the office of the Harrison Almanac , 1840
(click for more details about 1840 Campaign Broadside - Log Cabin Anecdotes; Illustrated Incidents In The Life Of Gen. William Henry Harrison)

Washington DC : The White House , 1939
(click for more details about Diary of Mabel Bachelder, White House Correspondence Secretary)
View all from this seller>