The Crime of Moscow in Vynnytsia 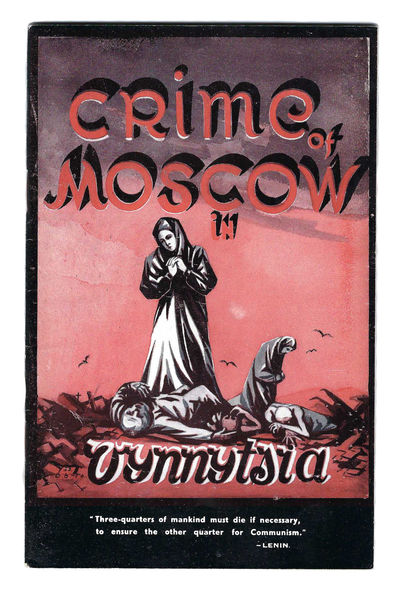 by [Introduction by] Stewart, John F.
Edinburgh: Scottish League for European Freedom, 1952. First Edition. Very good. First English edition; 8 1/2 x 5 1/2; pp. [5], 6-32; stapled pictorial wraps; mild rubbing and age-toning to tips of spine and corners; illustrated with numerous photographs; very good condition.The so called Vinnytsa Massacre was a mass execution, during Stalin's Great Purge (1937 - 1938), of predominantly ethnic Ukrainians in the town of Vinnytsa by the NKVD (Soviet Secret Police). During the German occupation of Ukraine in 1943, over 90 mass graves with more than 9000 "enemies of the people," most of them murdered in the local NKVD prison, were discovered. After the executions, the families had been told their relatives had died of natural causes, or that they had been transferred to labor camps in the Far North, while in fact detailed documentation of the murders was discovered buried in a separate pit, not far from the mass graves. An international commission investigated the graves and determined that almost all of the victims were executed by two shots in the back of the head.The edition was translated from the original Ukrainian, the latter published a year earlier in New York, and contained horrific, actual photographs, testimonies, etc. (Inventory #: 002775)
$100.00 add to cart Available from ZH Books
Share this item
ZH Books
Offered by

Bangkok : Ministry of Communication , 1917
(click for more details about Souvenir of the Opening of the Royal Siamese State Railway Southern Line 1917)
View all from this seller>