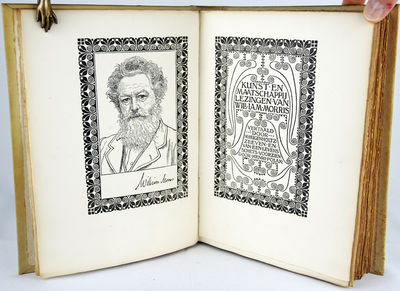 by Morris, William
Rotterdam: W. L. & J. Brusse, 1910. Krimpen, Jan van. Octavo. (vi), vii, (v), 159, (3)pp. A deluxe copy of the translation of Morris' work into Dutch, the regular edition of which was printed in 1903. Drawn title page and frontispiece, along with five Morris-like illustrations interspersed throughout. With typography in red and black by S. H. de Roos and a full vellum binding calligraphed by Jan van Krimpen in 1910, and with his ownership inscription on front endleaf, this copy represents a rare and phenomenal meeting of two of the foremost Dutch typographers. De Roos' Hollandsche Mediaeval was the first Dutch typeface in 150 years, and among the most successful of his eventual twelve faces. Van Krimpen's Lutetia and Romulus typefaces represent the height of classical precision in bookmaking, with the Romulus in particular offering a family of faces as extensive as impressive. Van Krimpen's binding calligraphy, executed at the age of seventeen, stands as an early exemplar of his lettering work. Minor foxing throughout, faintest rubbing to exterior, else near fine. (Inventory #: 30302)
$4,000.00 add to cart or Buy Direct from
Bromer Booksellers
Share this item

(N.P. n.d.)
(click for more details about (Paper). Bookbinding Ephemera)
View all from this seller>