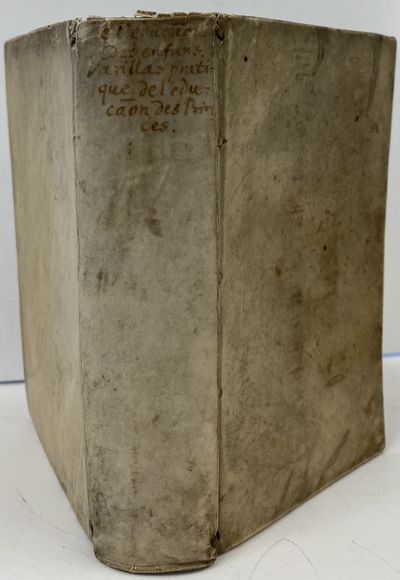 by [RIVET, Frédèric] and bound with VARILLAS, Monsieur
Both in Amsterdam: Chez Daniel Elsevier and H. Wetstein & H. Desbordes, 1684. Vellum. Good +. [CHILD EDUCATION] [FRENCH LANGUAGE]. 12mo; 262 + 407; contemporary vellum covered boards; title inked on spine; ffep and flyleaf have owner's notes; light soiling to boards, front board lightly bowed, vellum curling on rear board edge, damp staining to top edge mostly in second book; good plus. The first work: Second revised edition. This work has been attributed to Frederic Rivet (1617-1666) who was working in the Netherlands and a member of the "Raad" (Council of State). In this position, he was responsible for much of the influence and raising of the Prince of Orange, William III, who would later become King William "Dutch William" of England. Primarily, he was responsible for the diet and nutrition of William, but in developing a close relationship to William's grandmother, Amalia von Solms, he also exerted influence on William's general upbringing.

The first edition was published in Rotterdam by Arnout Leers in 1654, anonymously to avoid censure by the ultra-Calvinists. This edition was revised and published posthumously, also anonymously. While the argument is made that the book was important, the political upheaval in Europe and the religious tenor in the low countries, would have made the book's influence negligible. In the Netherlands there already existed broad educational support despite the ultra-Calvinists; in France it would not have been embraced because of its pro-Protestant slant. (Pedagogy, Culture & Society, Vol 9, II, 2001: Brita Rang).
Nonetheless it is a fascinating glimpse at the upbringing of young boys, specifically, that of a prince.

The second work is by Antoine Varillas (1624-1696), a French historian who records the life of Guillaume (William) of Croÿ (1458-1521), Lord of Chièvres, who was the Chief Tutor and First Chamberlain to Charles V, who became the Holy Roman Emperor and Archduke of Austria, King of Spain, Lord of the Netherlands, and Duke of Burgundy. (Inventory #: 1243)
$450.00 add to cart Available from
Sandra L. Hoekstra
Share this item

Mary Engelbreit's A Merry Little Christmas, Celebrate from A to Z.

New York : Simon and Schuster , 1959
(click for more details about Kay Thompson's Eloise in Moscow, Drawings by Hilary Knight)
View all from this seller>