EncyclopÊdia Britannica; or, A Dictionary of Arts and Sciences 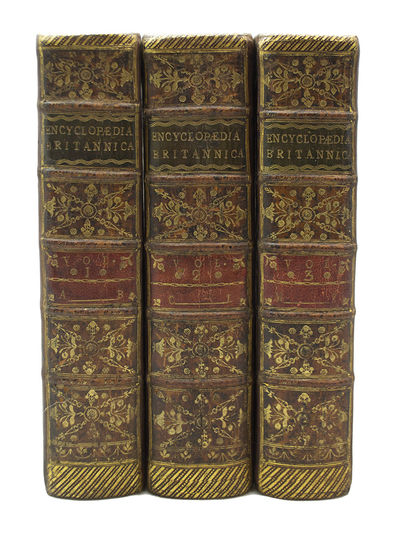 by ENCYCLOPAEDIA BRITANNICA
The First London Edition [ENCYCLOPAEDIA BRITANNICA]. EncyclopÊdia Britannica; or, A Dictionary of Arts and Sciences. Compiled upon a New Plan. In which the different sciences and arts are digested into distinct treatises or systems; and the various technical terms, &c. are explained as they occur in the order of the alphabet. Illustrated with one hundred and sixty copperplates. By a Society of Gentlemen in Scotland. In three volumes. London: Printed for John Donaldson, 1773. First London edition. This is an issue which uses the sheets of the first edition published in Edinburgh in 1771, with new preliminaries and a new preface made for the London audience. Three quarto volumes (10 1/4 x 8 inches; 260 x 204 mm). With 160 engraved copperplates, some of which are folding and some have been hand-colored. Some plates are bound out of sequence, but complete. (Vol I with 58 plates, Vol II with 56 plates and Vol III with 46 plates). Each volume with half-title. This edition is edited by William Smellie. and the engravings are by Andrew Bell. We could find only one other complete copy at auction since 1966. Bound in contemporary full mottled calf. Spines with some restoration. Morocco spine labels, Spines elaborately stamped in gilt and with a red and brown spine morocco label on each volume. Board edges tooled in gilt. Gilt dentelles. Previous owner's bookplate on front pastedown of each volume. Old ink ownership signature on front free endpaper of all volumes. Vol. I with a small tear to upper margin, not affecting text. on page 469 and some occasional minor dampstaining to fore-edge margin, not touching text. Vol. II with a repair to the crease of page one of the folding chemistry table. Generally pages are very clean. Overall a very lovely set. ìThe most famous of all encyclopaedias in the English language was sponsored by ëa Society of Gentlemen in Scotlandí...The Edinburgh ësocietyí could well have consisted only of the editor, the antiquarian William Smellie (1740-95), the engraver, Andrew Bell (1726-1809), and the printer, Colin Macfarquhar (died 1793)...The subtitle implicitly acknowledges the editorís indebtedness to Harris and Chambers, though later on (in the third edition of 1801) the dedication to the King sought to create the impression that the Britannica had been conceived as a means ëto counteract the tendency [of anarchy and atheism] of that pestiferous workí, the French EncyclopÈdie [of Diderot]. In fact, Smellie defined its purpose far more sensibly and convincingly in the preface of the first edition: ëUtility ought to be the principal intention of every publicationí. The Encyclopaedia Britannica appeared first in numbers...1768-71. The precedent of MorÈri and Bayle was followed when the second edition, 1778-83, included history and biography...From the supplement to the fifth edition, 1816-24, onward the Encyclopaedia Britannica, following the example of the EncyclopÈdie, appended the signatures of the contributors of articles of original value...and leading scholars and men of letters of all nations have continued to lend the lustre of their names to all subsequent editionsî (Printing and the Mind of Man). Printing and the Mind of Man 218. ESTC: N471190 HBS 68280. $30,000 (Inventory #: 68280)
$30,000.00 add to cart Available from
Heritage Book Shop
Share this item