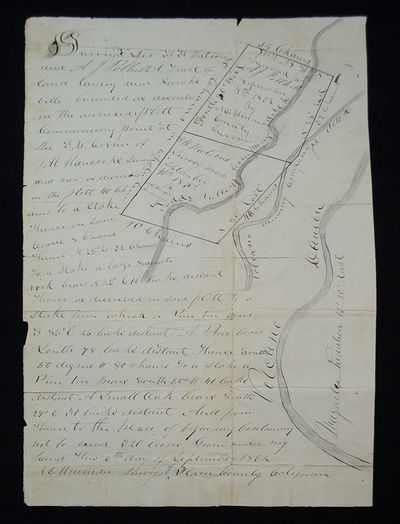 by GOLD RUSH
A Gold Rush Manuscript Land Survey [GOLD RUSH]. [Gold Rush Map Manuscript. Being a Survey for the adjoining plots of land belonging to H.H. Watson and A.J. Polhill. Placer County, California: 1852]. Two pages on a single sheet (17 1/8 x 10 7/8 in.; 438 x 275 mm). Manuscript document with map, dated variously between 4-24 September 1852, and signed by H.H. Watson, A.J. Polhill, and others. Sheet with some mild staining and ink blots. Some minor chipping at edges and some separations at the creases. Creases reinforced with nearly invisible tape. Overall a very interesting piece of gold rush history. We could not find any other California mine surveys at auction in the past 50 years. "Survey for H.H. Watson and A.J. Polhill. A Tract of land laying near [?ville] bounded as described in the annex plot commencing point as the S.W. corner of J.H. Hancock survey..." "Survey made by N.O. Hinman [?], County Surveyor..." "In the present survey, the tracts of land being issued to Watson and Polhill are bounded on the right by the Volcano Mining Company Ditch and Volcano Canion [sic], with the Todds [sic] Valley Company Ditch running through each plot. The Volcano Gold Gravel Mining Company was one of the most extensive gravel mines during the Gold Rush, and hundreds of acres of valuable mining lands were drained by its enterprises. Placer County falls in both the Sacramento Valley and Sierra Nevada regions, in what is known as the Gold Country. The discovery of gold in this region in 1848 brought tens of thousands of miners from around the world, and thousands more settled in the area to provide goods and services to them. The name "Placer" is taken from the Spanish word for gravel or sand deposits containing gold." (From Sotheby's). HBS 68368. $4,500 (Inventory #: 68368)
$4,500.00 add to cart Available from
Heritage Book Shop
Share this item