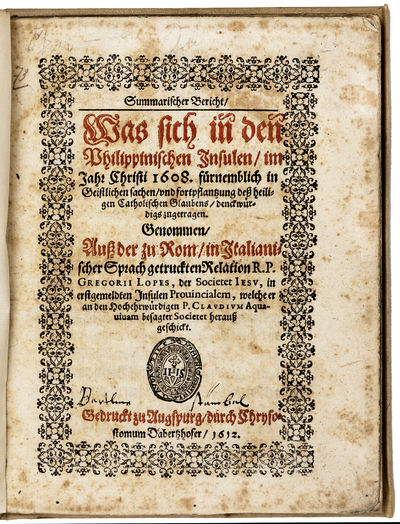 by LOPEZ, Gregorio
PRINTED IN AUGSBURG BY DABERTZHOFER

Bound in later vellum; 4to., (8) ff,94 ff. Printed title in red and black; occasional marginal foxing throughout volume, more pronounced on tp; otherwise quite fresh.
First German language edition (also the first to be translated from the original Italian of 1611) of one of the earliest printed western works solely devoted to the Philippines by the Jesuit Gregorio Lopez, active in the Philippines from his arrival in May of 1601 until his death (in Manila) in 1614. This publication would appear to be the first German language work on the subject; and its publication, by Chrysostomus Dabertzhofer, who ran a Catholic print shop in Augsburg between 1608 and 1614, reveals not just an appetite for exotic travel literature among German readers of the period, but a keen interest in knowing the latest news of the battle for souls fought on the other side of the world, in this case the Pacific, between Catholics and Protestants.
"Distressed by a new growth of problems for Christianity in Japan and by the appearance of the Protestant Dutch in the Pacific, Rome itself began to pay more attention to the missions in the strategically located Philippines… The Jesuits, for example, started to publish separately certain of their Annual Letters from the Philippines to let the faithful in Europe know of the victories still being won in the Pacific despite setbacks in Japan" [Lach, vol. 3, part 3, pp. 1491-2]. The publisher of Lopez' volume, Chrysostomus Dabertzhofer, ran a Catholic print shop in Augsburg between 1608 and 1614, which specialized almost exclusively in Jesuit material. His business was one of only two Catholic publishing houses (the second being the shop of Andreas Aperger) operating in Augsburg in the first half of the seventeenth century. These two presses competed with four or five Protestant print shops in Augsburg, yet they managed to produce about 40 per cent of the city's total book production at the time.
Jesuit letters from the Philippines were dispatched on yearly galleons, which departed every June for Acapulco, and from there to Europe for publication. "They summarized the activities of each house of the province from June to June on the basis of reports sent into the central office in Manila. Sometimes they quoted extensively from these reports. They are thus an invaluable source of first-hand information, particularly with regard to the missions" [De la Costa, p. 629]. With the exception of Ribera's annual letter for the year 1602/3, earlier Jesuit reports were effectively buried in a miscellany of reports on Peru and Japan and were typically very brief, usually several pages in length. Lach calls early Jesuit annual reports dedicated solely to the Philippines like Lopez's "exceedingly rare" [Lach, vol. 3, part 3, p. 1492, n. 4].
Lopez' substantial work is more than 180 pages in length. It opens with a general overview of the Philippines: the land is good; the air is warm; there is an abundance of rice, sugar, beans, all sorts of vegetables, honey, figs, fish, chickens, and ducks. Gold and iron are in rich supply and are regularly transported back to Spain via Acapulco. Lopez systematically reviews the progress of all the mission outposts, "and refers especially to the difficulties with the Muslims in the 'Pintados' (the Bisayan islands) and in Mindanao" [Lach, vol. 3, part 1, pp. 372-3]. In addition to activities at the College in Manila, the region's headquarters, Lopez reports on Antipoli, Taitai, Santiago, the Island of Pintados, Cebù, Bohol, Dulach, Tinagor and Cariaga, and Ottona. The incursion of the Dutch into the region is mentioned periodically as are observations on the Muslim population. Among more local matters, Lopez describes such current problems as the infestation of crocodiles in Taitai and the curious description of a branch of the Iti tribe in Santiago who shun daylight and live in caves.
Gregorio Lopez (1561-1614), was a native of Alcocer. He studied theology at Alcalá de Henares before taking the Jesuit habit in Mexico. After sixteen years there, in 1601 he traveled to the Philippines together with seven priests and three brothers. He became the rector of the seminary at Manila, then vice-provincial and eventually the provincial of his order for eight years. Altogether, he spent fourteen years in the Philippines.
The OCLC lists 2 copies in North America, at the Newberry & Indiana U.
*Streit, vol. 5, pp. 253-254; de Backer & Sommervogel, Bibliothèque des écrivains de la Compagnie de Jésus ou Notices, vol. 3, p. 2311; Palau 140,000; Lach, Asia in the Making of Europe, vol. III.1.373; H. de la Costa, The Jesuits in the Philippines, 1581-1768; H. Künast, "Book Production and Trade," in A Companion to Late Medieval and Early Modern Augsburg. Not in Blair and Robertson, The Philippine Islands, 1493–1898 [BR]. (Inventory #: 6014)
$5,500.00 add to cart Available from Martayan Lan
Share this item
Martayan Lan, Inc.
Offered by