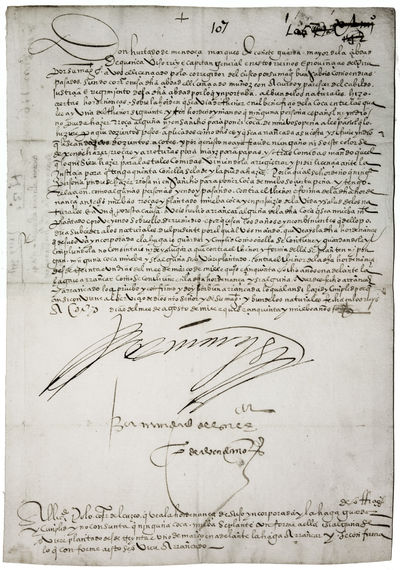 Early manuscript ordinance in the name of the 5th viceroy of Peru, Hurtado (1555-60), evidently unpublished, relating to the cultivation of coca leaves in early colonial Peru, and an important document for the importance of the coca trade for both Spanish commercial interests and social control of the indigenous population. The ordinance is signed by Hurtado and presumably a secretary, dated Cuzco, 1559, a very early date for manuscript material from colonial Peru. Opposed for its use in Indian superstition and ritual and castigated by Las Casas no less for its lethal effects on the native population, coca had such economic importance that it forced successive governors into regulating rather than abolishing or even diminishing its cultivation and trade. The most significant reason, as given by coca proponents, was that it formed the principal medium of exchange for silver plate (cf. Gagliano, 1996). Workers were initially given their wages in coca and forced to work grueling hours, often leading to death by starvation: coca was an appetite suppressant, and other diseases followed in the wake of addiction. Contemporary estimates of mortality rates range between one-third and one-half of the work force annually. Nonetheless, rather like the British introduction of opium into 19th century China, or mind-altering drugs in the nightmare societies of science fiction, the drug proved an effective means of social control.
Acknowledging these dangers, Hurtado, the 5th viceroy of Peru, notes here that in spite of previous ordinances to improve the conditions of the coca trade, further action is needed. He repeats invectives against forced labor on coca plantations, whether by Indians or Spaniards, under pain of a 200 peso fine. The growing of maize, potatoes, "y otras comidas" is also mandated in order to supply workers with adequate food rations. The size of coca plantations is also limited, with penalties for infractions specified. Hurtado's efforts were defeated by the powerful coca "lobby" and his efforts were limited to the improvement of working conditions.
The leading authority of the 16th century coca trade in Peru, Joseph Gagliano, explicitly treats the regulations enacted under Hurtado's tenure as viceroy. In connection with Hurtado, Gagliano only cites a modern publication of a late 16th century manuscript, which discusses various ordinances (Gobierno del Perú, obra éscrita en el siglo XVI). As the present ordinance is not included, and we find no other record of its publication, we infer that it is unpublished.
With thanks to Dr John O'Neill of the Hispanic Society of America for confirming Hurtado's signature.
*Joseph Gagliano, "The coca debate in Colonial Peru," in Walker (ed.), Drugs in the Western Hemisphere: An Odyssey of Cultures in Conflict (1996). (Inventory #: 5231)
$6,000.00 add to cart Available from Martayan Lan
Share this item
Martayan Lan, Inc.
Offered by