CAMP-FIRE, MEMORIAL-DAY, AND OTHER POEMS 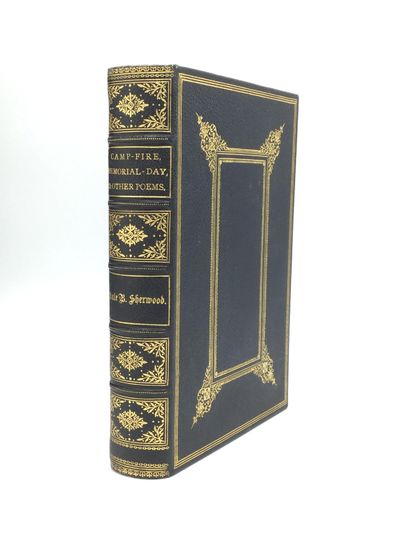 by Sherwood, Kate Brownlee
Chicago: Jansen, McClurg, & Company, 1885. First Edition. Hardcover. Very good. Tipped in on a prefatory blank leaf is an original albumen portrait of Kate Sherwood above a clipped autograph, as well as two autograph letters signed (ALS), one by Kate Sherwood on Ohio Soldiers and Sailors' Orphans' Home letterhead and the other by her daughter, Lenore Sherwood, on Woman's Relief Corps letterhead. Additionally, a Grand Army of the Republic ribbon and related newspaper clippings are tipped in at the front. A volume of recitations for Grand Army camp fires, this was Sherwood's first collection of verse and her most widely read. The poems focus primarily on the Civil War and its aftermath, with selections like "Christmas at the Soldiers' Orphans' Home" and "Thomas at Chickamauga" which did much to support Sherwood's philanthropic work. In 1883, she was one of the founders of the Woman's Relief Corps (WRC), an auxiliary of the Grand Army of the Republic, the organization for veterans of the Union Army. Preceding the United Daughters of the Confederacy by more than a decade, the WRC provided charity for poor Northern veterans, advocated for legislation to provide pensions for nurses who served during the Civil War, and within 25 years of its founding, grew to include over 100,000 members. An extra-illustrated edition, with 12 plates (it appears plates have been removed). It was issued without illustrations. Octavo. In a full black morocco binding by Cox of Chicago, with elaborate gilt stamping, five raised bands, ornamental dentelles, and marbled endpapers. The contents are a little shaken. An old bookseller's description is tipped in at the front. The spine is leaning just a touch; otherwise very good. (Inventory #: 72104)
$100.00 add to cart or Buy Direct from Johnson
Share this item

by Aldrin, Buzz and Malcolm McConnell

YOU CAN WRITE CHINESE

New York : The Viking Press , 1945
(click for more details about YOU CAN WRITE CHINESE)
View all from this seller>