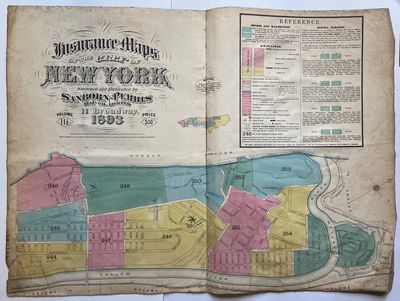 by SANBORN MAP COMPANY
New York: Sanborn Perris, 1893. hardcover. Map. Lithograph with original hand coloring. Backed with linen. Measures 25 3/4" x 35 1/4". This title page from Volume 11 1/2 of Sanborn Map Company's Atlas "Insurance Map of the City of New York" depicts upper Manhattan from 170th St. extending northward to Marble Hill. Interestingly, this map shows Marble Hill as an island separated from the rest of Manhattan by the Harlem River Ship Canal, which was completed in 1895, two years after this Atlas' publication. The small island is separated from The Bronx by Spuyten Duyvril Creek, which, prior to construction of the canal, was the natural course of the Harlem River connecting to the Hudson River. Several pencil markings and notations show this map's practical use by insurance agents. In addition to the map of upper Manhattan, the title page also features a large legend, outlining the characters and colors used in the map and their significance. A miniature map showing the entire island of Manhattan and The Bronx with neighborhoods labeled and colored to indicate the respective volume of the Atlas in which their appear. This map shows signs of wear and use, with soiling and scuffs throughout, and water damage to the lower right margin. Folded as issuedThe Sanborn map collection consists of a uniform series of large scale maps, dating from 1867 to the present depicting the commercial, industrial, and residential sections of some twelve thousand cities and towns in the United States, Canada, and Mexico. The maps were designed to assist fire insurance agents in determining the degree of hazard associated with a particular property and therefore show the size, shape and construction of dwellings, commercial buildings, and factories as well as fire walls locations of windows and doors, sprinkler systems, and types of roofs. The maps also indicate widths and names of streets, property boundaries, building use, and house and block numbers. They show locations of water mains, giving their dimensions, and of fire alarm boxes and hydrants. Sanborn maps are an unrivaled source of information about the structure and use of buildings in American Cities. The collection includes some fifty thousand editions of fire insurance maps comprising an estimated seven hundred thousand individual sheets. The Library of Congress holdings represent the largest extant collection of maps produced by the Sanborn Map Company. The majority of the maps were acquired by the Library through copyright deposit, but the collection was substantially enriched in 1967 when the Bureau of the Census transferred to the Library of Congress a complete set. The 1,899 loose-leaf binders were particularly noteworthy because they included later editions than those previously acquired by the Library. The Bureau of the Census set of maps had been regularly updated by printed, paste-on corrections supplied by the Sanborn Map Company, whereas the Library of Congress copies were retained in the form in which they were copyrighted. (Inventory #: 298055)
$450.00 add to cart or Buy Direct from
Argosy Book Store
Share this item