Oscar Wilde: In Earnest and Out. 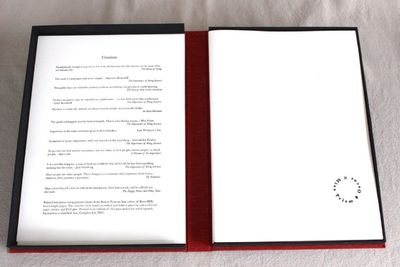 by [Naughty Dog Press] Emily Martin.
Iowa City, Iowa:: Naughty Dog Press,, 2020.. Edition of 25. 13 x 9.25". Five Volvelles. Letterpress printed using polymer plates on different shades of BFK paer. Each volvelle laid in paper folder. Encolsed in a cloth covered clamshell box. Signed and numbered by the artist. Emily Martin: "A set of five volvelles portraying five faces of Oscar Wilde backing five faces of characters from Wildes play The Importance of Being Earnest. The inner wheels turn to allow the reading of lines from the play and other of Wildes writings." Emily Martin, YouTube video introuction: "I became aware of Oscar Wilde in college when we studied him. He was celebrated in his time in the late eighteen hundreds as a writer of all sorts in particular as a playwright. He was at the height of his celebrity when he was accused of being a sodomite. Sued and not only lost the suit but then was convicted for committing acts of gross indecency with other male persons under section 11 of the 1885 of the criminal law ammendment act. And this act was not fully repealed in England until 2003. "'The Importance of Being Earnest" was one of his famous important plays. It is social commentary and very witty. It has a number of characters who trade lines with each other throughout the play. This artist's book is a series of volvelles in which Oscar and five of the characters fom his play have a dialogue of sorts using lines from the play and Oscar's lines are all from other of his writings. " Oscar Wilde served two years in prison. He emerged in broken health, impoverished, and cut off from his family. He exiled himself to France and died three years later in November 1900. His plays have never been out of print and are regularly staged in theatrical productions and films. Oscar Wilde's pointed observations are as apt now as when he first put pen to paper. (Inventory #: 23108)
$950.00 add to cart Available from Vamp & Tramp
Share this item
Vamp & Tramp, Booksellers, LLC
Offered by