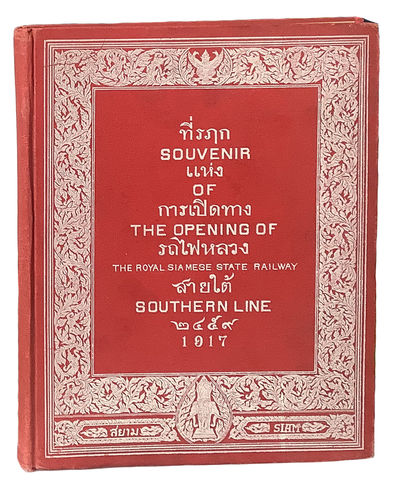 by Various
Bangkok: Ministry of Communication, 1917. First Edition. Very good. First edition; 9 x 7 1/4; pp. [8], 1-62, [1]; pebbled red cloth over boards, printed and ruled in white with an intricate border; title to front board in English and Thai; illustrated with numerous color and black and white plates, including a large, fold-out panorama and a very large fold-out map; small rubbed spots to corners and a bit of wear to tips of spine; bookplate to front board verso of Francis M. White (1892 - 1961) - American diplomat and Trustee of John's Hopkins University; an almost-illegible note / inscription to ffep, presumably by White himself to a relative (wife [?]); glue residue around bookplate; overall in very good condition.An uncommon railroads and travel publication, it commemorated the completion of the Southern Line of the Royal Siamese State Railway, which was founded in 1890 as the Royal State Railways of Siam, with plans commissioned from and drawn by British Lieutenant General, Governor, and surveyor and politician in Australia Sir Andrew Clarke (1824 - 1902). Unlike the Northern Line, which was completed in 1897, the Southern Expansion was built in metre-gauge (narrow-gauge), to fascilitate the transition to the also metre-gauge tracks in Burma and Malaya, among other things. Another interesting tidbit was that the Soutern Line was, in fact, cut off from the rest of the railroad network, as there was no bridge across the CHao Phraya River, thus the route did not depart from Bangkok, but had its own terminus in Thonburi. (Inventory #: 002778)
$200.00 add to cart Available from ZH Books
Share this item
ZH Books
Offered by