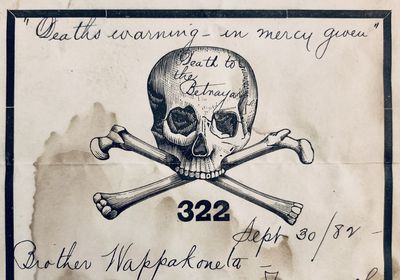 Two letters, dated 9/13/1882 and 9/30/1882, in which "Oconomowoc Grand High Muck" informs "Brother Wappahoneta" of the (a 'Red Fire' member) that it has come to his attention that BW had "not been living up to his oath". The first letter ends with the warning, "Remember you are watched, so beware." The second letter, on Skull and Bones letterhead (with "Death to the Betrayer" written on the forehead of the skull), that since the prior letter, BW had "boasted in public some of [the club's] secrets." The Grand High Muck then "pronounce[s] on you the death sentence" and lets him know that the "Avenger" is tracking him. The second letter is signed by the Grand High Muck and countersigned by Running Water, Prime Minister.
The letters were framed and, when removed from the frame, a third sheet, "Pedigree of Scotch Collie" was found behind the letters. It appears to track the litters of Shep and Prince...why it was concealed behind the letters is unknown. Oconomowoc is a city in Waukesha County, Wisconsin, (derived from Coo-no-mo-wauk, the Potawatomi term for "waterfall"). Wapakoneta is a city in and the county seat of Auglaize County, Ohio.
Skull and Bones ephemera is uncommon to the market and this is a particularly pleasing pair of letters. (Inventory #: 10002)
$1,500.00 add to cart or Buy Direct from
Lux Mentis, Booksellers
Share this item
Lux Mentis, Booksellers
Offered by

London : Henningham Family Press , 2009
(click for more details about The nth Convention (second edition))
View all from this seller>