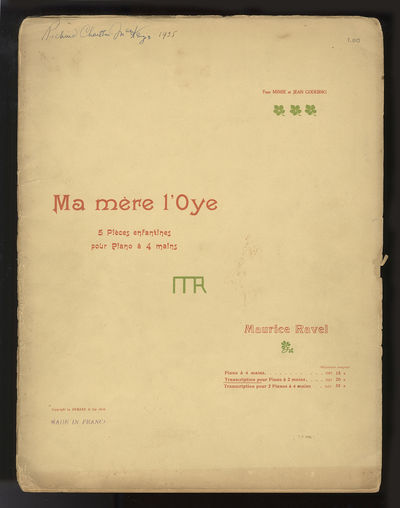 - Le Tombeau de Couperin Prélude - Forlane - Menuet - Rigaudon Suite d'Orchestre. Paris: Durand & Cie [PN D. & F. 9810], [after 1919]. Arranged for piano 4-hands by Lucien Garban (1877-1959). Original publisher's dark green wrappers. 1f. (recto title, verso blank), 31 pp. Orenstein, 234. Marnat, 763. Premiered in Paris at a concert of the Société musicale indépendantem Salle Gaveau on 11 April 1919, with Marguerite Long. Le Tombeau de Couperin was conceived amid the turmoil of the first world war. "In 1917, Ravel received a temporary discharge from military duty ... In this restful setting, he completed Le Tombeau de Couperin, much of which had been written in 1914. Each of the piano suite's six pieces was dedicated to the memory of a fallen comrade in arms. The 'Rigaudon,' for example, was dedicated to the composer's childhood friends Pierre adn Pascal Gaudin, the 'Prélude' to Lieutenant Jacques Carlot, a cousin of Jacques Durand, who had transcribed several of Ravel's works, and the 'Toccata' to Captain Joseph de Marliave, the husban of Marguerite Long." Orenstein: Ravel, p. 75.

- Valses nobles & sentimentales. Paris: Durand & Cie [PN D. & F. 8247], 1911. Original publisher's green printed wrappers. 1f. (recto title printed in green and black, verso blank), 25 pp. First Edition, later issue. Orenstein, 231. Marnat, 757. Ex libris American composer and music publisher Ray Green (1908-1997), with his handstamp to outer corner of upper wrapper. Premiered in Paris at a concert of the Société musicale indépendante, Salle Gaveau, on 9 May 1911, by Louis Auber. "In the Valses nobles et sentimentales [Ravel] creates a powerful tension between the Romantic idiom and classical restraint; he selfconsciously claimed that he was aiming for 'a style that is simpler and clearer, in which the harmony is harder and the lines of the music are made to show up." Barbara L. Kelly in Grove Music Online