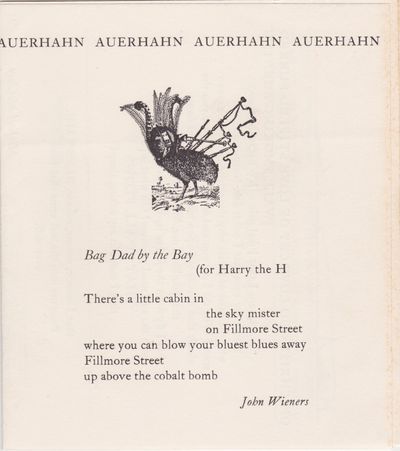 SIGNED by Michael McClure, one of the authors featured in this broadside for Auerhahn publications. The broadside features excerpts of poetry by McClure, John Wieners, Philip Lamantia, and Philip Whalen. The idea was to promote Auerhahn's books and pamphlets. Although the broadside doesn't contain a publication date, we estimate 1959, based on the broadside's list of forthcoming publications.

Dave Haselwood founded Auerhahn in 1958 and published works that increased the influence of the Beat movement. His publications "were known to those on the scene as thoughtfully designed, beautifully produced aesthetic objects showcasing some of the finest voices of the 'new poetry.'" (Steven Belletto, The Beats: A Literary History, page 252.)

Michael McClure, who signed this broadside, was instrumental in launching the Beat movement. He died on May 4, 2020, at age 87. McClure took part in a legendary poetry reading at the Six Gallery in San Francisco in October 1955. Other readers were Allen Ginsberg (who read an early version of Howl), Philip Lamantia, Gary Snyder, and Philip Whalen, with Kenneth Rexroth acting as master of ceremonies.

A beautiful broadside from Auerhahn Press signed by the late Michael McClure. Copies of the broadside are scarce to the market, signed copies even more so.

[Santa Barbara] : No Publisher Stated , 1970
(click for more details about [Handbill for 1970 Poetry Reading Signed by Allen Ginsberg, Lawrence Ferlinghetti, and Kenneth Rexroth)
View all from this seller>