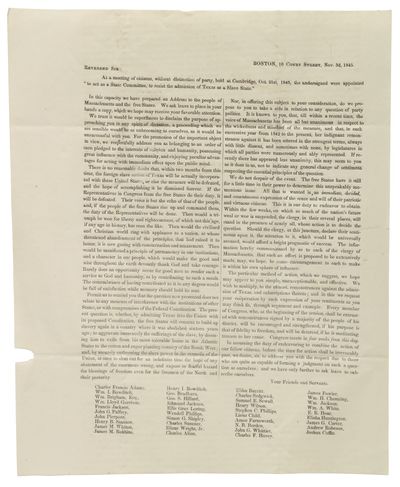 "At a meeting of citizens, without distinction of party, held at Cambridge, Oct. 21st, 1845, the undersigned were appointed 'to act as a State Committee, to resist the admission of Texas as a Slave State.' In this capacity we have prepared an Address to the people of Massachusetts and the free States."

"There is no reasonable doubt that, within two months from this time, the foreign slave nation of Texas will be actually incorporated with these United States, or else the measure will be defeated, and the hope of accomplishing it be dismissed forever. If the Representatives in Congress from the free States do their duty, it will be defeated. Their voice is but the echo of that of the people...."

"Permit us to remind you that the question now presented does not relate to any measure of interference with the institutions of other States, or with compromises of the Federal Constitution. The present question is, whether, by admitting Texas into the Union with its proposed Constitution, the free States will consent to build up slavery again in a country where it was abolished sixteen years ago...."

"The free States have it still for a little while in their power to determine this unspeakably momentous issue. All that is wanted is an immediate, decided, and consentaneous expression of the sense and will of their patriotic and virtuous citizens. This it is our duty to endeavor to obtain."

"We wish to multiply, to the utmost, remonstrances against the admission of Texas, and subscriptions thereto; and in this we request your cooperation by such expression of your sentiments as you may think fit, through argument and example. Every member of Congress who, at the beginning of the session, shall be entrusted with remonstrances signed by a majority of the people of his district, will be encouraged and strengthened, if his purpose is that of fidelity to freedom, and will be deterred, if he is meditating treason to her cause."

As early as 1836, when Texas became an independent republic, the issue of annexation divided the United States. While popular in the South, the idea of adding Texas to the Union was very unpopular in much of the North because it would add another slaveholding state to the fragile balance established by the Missouri Compromise of 1820. Former President and member of Congress from Massachusetts John Quincy Adams, an outspoken abolitionist, strongly opposed the annexation of Texas. In 1838, he led a 22-day filibuster in the House of Representatives to block the annexation of Texas.

In March 1843 and again in March 1844, the General Assembly of Massachusetts passed resolutions opposed to the annexation of Texas. In June 1844, the U.S. Senate rejected a treaty of annexation that Secretary of State John C. Calhoun had secretly negotiated with Texas officials.

In 1836, Congress had adopted the notorious "gag rule" that declared that all petitions related to slavery or the abolition of slavery would be immediately tabled, and Congress would take no further action on them. In 1840, the House of Representatives passed a new rule that prohibited even the reception of anti-slavery petitions. Throughout the period, Congressman John Quincy Adams evaded the rule by using parliamentary maneuvers. In December 1844, Congress finally rescinded the gag rule in a resolution written by Adams. This legislative success ensured that petitions that opposed the annexation of Texas would at least reach Congress.

On October 21, 1845, a group of citizens met at the Lyceum Hall in Cambridge, Massachusetts, to adopt resolutions in opposition to the annexation of Texas as a slave state. Henry Wilson served as the chairman of the meeting, and William Lloyd Garrison offered the following resolution, which was adopted without opposition:

Resolved, That should the perfidious and illegal act of Texan annexation be consummated at the next session of Congress, it will be the constitutional duty of the Legislature of Massachusetts promptly to declare, in the name of the people, that such act is null and void, and can never receive their sanction, be the consequences what they may.

In addition to drafting this broadside message to Massachusetts clergy, the State Committee appointed at that meeting also adopted a form for petitions to be sent to Congress:

To the Honorable Senate and House of Representatives of the United States, in Congress assembled:

The undersigned, citizens of the State of solemnly remonstrate and protest against the admission of Texas as a State of this Union, for various reasons, but this especially, because its Constitution, as far as it can, supports and perpetuates slavery and the slave trade.[1]

This circular letter was distributed to the clergy of Massachusetts about a month before the Twenty-Ninth Congress reconvened. The first signer of this circular was Charles Francis Adams. His father, John Quincy Adams, had fought for years in Congress to block the admission of Texas, which he said would leave the Constitution "a monstrous rag." Despite the continued efforts of both Adamses, Congress admitted Texas into the Union as the 28th state by a joint resolution signed by President James K. Polk on December 29, 1845. U.S. Senators John Davis and Daniel Webster and all nine of the Congressmen from Massachusetts opposed the joint resolution; the tenth seat from Massachusetts was vacant.

Charles Francis Adams (1807-1886) was born in Boston as the youngest son of President John Quincy Adams and the grandson of President John Adams. He graduated from Harvard College in 1825, studied law with Daniel Webster, and opened his own law practice in Boston. He served in the Massachusetts House of Representatives from 1840 to 1842, and in the Massachusetts Senate from 1843 to 1845. In 1848, he was the vice-presidential nominee of the Free Soil Party. Between 1850 and 1856, Adams published ten volumes of his grandfather's political biography and works. He represented Massachusetts in the U.S. House of Representatives from 1859 to 1861, when President Abraham Lincoln appointed him as ambassador to the United Kingdom, a position he held from 1861 to 1868. During the American Civil War, Adams successfully kept the British government from recognizing the Confederacy and pursued claims against British companies that illegally built ships for the Confederacy.

William Lloyd Garrison (1805-1879) was born in Massachusetts, deserted by his father at age two, and raised by his mother until her death in 1823. At age thirteen, Garrison began working as an apprentice for a newspaper. When his apprenticeship ended, Garrison purchased the Newburyport Free Press. In 1828, he became editor of the National Philanthropist, a temperance newspaperin Boston. Around the same time, he joined the anti-slavery movement. In 1829, he became co-editor of the Quaker anti-slavery newspaper Genius of Universal Emancipation, published in Baltimore. In 1831, he returned to New England and co-founded the anti-slavery newspaper The Liberator. Over the next three and a half decades, Garrison advocated abolitionism on moral and religious rather than political grounds. He also used his newspaper to promote women's rights. In 1833, Garrison was one of the founders of the American Anti-Slavery Society, for which he served as president from 1843 to 1864. Garrison's opposition to slavery was so radical that he once characterized the United States Constitution as "a Covenant with Death, an Agreement with Hell" for its compromises on the issue of slavery.

Wendell Phillips (1811-1884) was born in Boston to the first mayor of Boston and his wife. Phillips graduated from Harvard College in 1831 and from Harvard Law School in 1833. After admission to the bar, he opened a law practice in Boston. Converted to the abolitionist cause by William Lloyd Garrison in 1836, Phillips stopped practicing law to devote himself to the movement. An eloquent speaker, Phillips became known as "abolition's golden trumpet." In 1845, he argued that the United States would be better off if the slave states seceded, and sixteen years later, he defended the right of Confederate States to secede. Once the war began, however, Phillips strongly supported the Union war effort. Phillips was also active in the women's rights movement, supporting women's right to own their property and to vote. After the Civil War, he supported black suffrage and equal rights for Native Americans.

Charles Sumner(1811-1874) was born in Boston and graduated from Harvard College in 1830 and from Harvard Law School in 1834. After admission to the bar, he joined a private practice in Boston. From 1837 to 1840, he traveled in Europe and became fluent in French, Spanish, German, and Italian. He met many of the leading statesmen of Europe and determined to be an abolitionist when he returned to America. He became a popular orator for formal occasions, spoke against slavery and the Mexican War, and worked with Horace Mann to improve public education. In 1848, he helped organize the Free Soil Party, and in 1851, Democrats gained control of the Massachusetts state legislature in coalition with Free Soilers. The legislature elected Sumner to the U.S. Senate, where he served from 1851 to 1874, initially as a Free Soiler and later as a Republican. He became a leader of the opponents of slavery in Congress. When Sumner mocked pro-slavery Senator Andrew Butler of South Carolina in 1856, Butler's cousin Representative Preston Brooks retaliated by beating Sumner into unconsciousness on the Senate floor. While Brooks became a hero in the South, most northerners were outraged at the assault on free speech. Sumner traveled to Europe twice to recuperate and did not return permanently to the Senate until 1859. During the Civil War, Sumner was a member of the Radical Republicans, who pressured President Abraham Lincoln to issue an emancipation decree. Sumner served as chairman of the Senate Foreign Relations Committee, from which he orchestrated U.S. recognition of Haiti in 1862. After the Civil War, Sumner was instrumental in the impeachment proceedings against President Andrew Johnson.

John Greenleaf Whittier (1807-1892) was born in Massachusetts into a Quaker family. Largely self-educated, he did attend Haverhill Academy in 1827 and 1828 and completed a high school education in two terms. William Lloyd Garrison published Whittier's first poem in 1826. Garrison gave Whittier a job as editor of a temperance weekly and then of a manufacturing weekly in Boston. By 1830, Whittier had become editor of the New England Weekly Review in Hartford, Connecticut, the most influential Whig journal in New England. In the 1830s, Whittier joined the abolitionist cause and began writing pamphlets and poems in opposition to slavery. Although a physical breakdown in the mid-1840s limited his active participation in the abolitionist movement, he did participate in the evolution of the Liberty Party into the Free Soil Party and helped to convince Charles Sumner to run on the Free Soil ticket for the U.S. Senate in 1850.

Virginia; Providence, Rhode Island 1780
(click for more details about Jefferson’s Excessively Rare BILL FOR ESTABLISHING RELIGIOUS FREEDOM Only the second known newspaper printing, and the first front-page printing. One of the three achievements of which Jefferson was most proud, as listed on his epitaph.)

September 1789 Printing of the Act Establishing the Treasury Department, Along with Important Congressional Debates on Organizing the Federal Judiciary

Philadelphia : John Dunlap and David C. Claypoole , 1789
(click for more details about September 1789 Printing of the Act Establishing the Treasury Department, Along with Important Congressional Debates on Organizing the Federal Judiciary)
View all from this seller>