Dealings with the Firm Dombey and Son, Wholesale, Retail, and Exportation 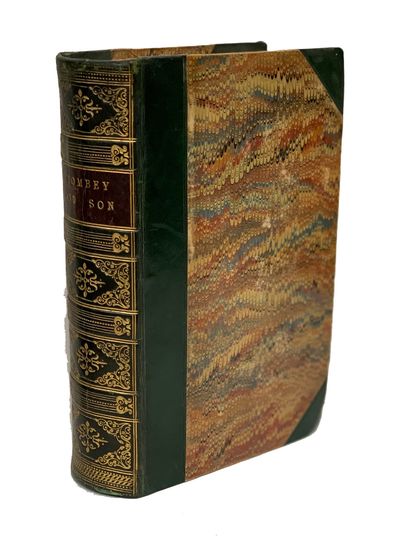 by Dickens, Charles
London: Bradbury & Evans, 1848 Illustrated by Hablot Knight Browne ("Phiz"). First edition. Bound in contemporary three-quarter green polished calf over marbled boards, with four raised bands to the spine, contrasting dark red leather title label lettered in gilt, spine elaborately decorated in gilt. Light wear and rubbing to spine ends and corners, a few small scuffs to the spine; some light scattered foxing, plates rather toned as usual. A very good copy. Smith I, 8. Dombey and Son is a novel about the wealthy Dombey family who owns the titular shipping company Dombey and Son. The text follows Paul Dombey, Sr., who has high hopes for his sickly son, Paul, as a future business partner, and neglects his healthy daughter, Florence. Throughout the text, Dickens explores the relationship between one's personal and professional lives as well as the relationship between parent and child. Considered the text that solidified his reputation as a renowned author, Dombey and Son is regarded as Dickens' first artistically mature work, with carefully plotted serial installments and a preplanned outline for the entire work. Dickens wrote this book in various locations including Switzerland, England, and France. Dombey and Son contains 40 illustrations by Browne, published and signed under the pseudonym Phiz, including two plates that were etched as well as drawn by the illustrator. Dombey and Son also marked a successful experiment in new illustration techniques; it contains the first published example of a "dark plate," appropriately titled "On the Dark Road" (page 547), "which was created by a machine process that tinted the etched plate and heightened its black-and-white contrast." Additionally, Dombey and Son is the first example of Browne's horizontal illustrations for Dickens' novels. He would continue to use both of these techniques in Dickens' next novel, David Copperfield. . First Edition. Hard Cover. Near Fine. (Inventory #: CD134)
$600.00 add to cart or Buy Direct from
B & B Rare Books
Share this item

The Adventures of Tom Sawyer

Hartford: American Publishing Company, , 1890
(click for more details about The Adventures of Tom Sawyer)
View all from this seller>