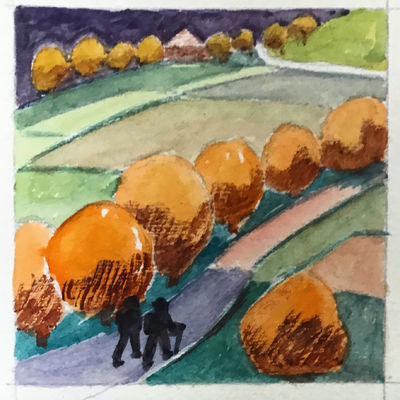 by [MANUSCRIPT]
Switzerland, 1946. Extraordinary outsider manuscript, produced in Switzerland during the Second World War, comprising almost seven thousand individual color illustrations by an unknown artist. Most of the carefully composed images are detailed glimpses of prewar European life, ranging across genres: landscapes, portraits, still lifes, domestic scenes, pictograms and icons. Themes return, but no recurring characters; despite the manuscript's resemblance to a storyboard or comic strip, the images are connected only by a kind of dream logic, and do not appear to follow a linear narrative. The artist works in a number of modes, some abstract, some stylized, some meticulously realistic, but all executed with great skill and force. As a work of art, the manuscript calls to mind the haunted quality of writers like Stefan Zweig, Robert Walser, and W.G. Sebald. Strikingly, many of the images are captioned with words that do not reliably correspond to any Western language, or to engineered auxslangs like Esperanto or VolapÃ¼k. Some words show the influence of SchwyzerdÃ¼tsch, the spoken Swiss-German dialect, but for every caption that recalls a known language, there is another that remains entirely opaque. If not a language, the captions may represent ciphers or anagrams; the phonetic aspect of some words suggests that the speaker may be a child, repeating received sounds rather than spellings. In March of 2020, German cryptographer Klaus Schmeh added the manuscript, under the provisional title Europa Redux, to his public checklist of encrypted books; the code (if it is a code) of the captions remains unsolved. The manuscript's words, like its images, have an algorithmically generated quality, suggesting endless variation within strict bounds. The first 75 sheets are numbered in sequence. After that, the sheets are dated, rather than numbered. The dates indicate that the artist typically produced one sheet per week (perhaps as a therapeutic exercise), but there are gaps: whole months are unaccounted for in 1945 and 1946. The earliest sheets are wordless, executed in colored pencil and crayon, with uncaptioned images in rectangular frames. After a series of experiments with media and genre, including several themed sheets inspired by the conventions of travel posters and matchbook graphics, the artist settles into a distinctive style, capturing Europe, in bright kaleidoscopic fragments, at the moment of its implosion during the Second World War. See the Instagram account @europaredux for a more complete survey of the manuscript and ongoing speculation about the artist's identity, language, and purpose. An obsessive and captivating work of art, worthy of serious study. Manuscript consisting of 106 loose poster-sized sheets, each measuring 17.25 x 23 inches. Each sheet covered with a grid of uniformly sized color illustrations, executed in pencil, oil pastel, watercolors or crayon on rectos only, 42 to 81 images to a sheet. Numbers penciled in margins (at least three numerical sequences, some overlapping), some sheets dated in pencil, all sheets unsigned. Pinholes to corners of each sheet. Housed in a modern portfolio. (Inventory #: 1002826)
$38,000.00 add to cart or Buy Direct from Honey & Wax
Share this item
Honey & Wax Booksellers
Offered by

London : Design for Today , 2017
(click for more details about A Bloomsbury Souvenir; with: Six Views of Bloomsbury (postcards))

Basel : Basilius Presse , 1968
(click for more details about Sketch...Book. Le Non-ObÃ©issant: The Disobedient: Der Ungehorsame)
View all from this seller>