Collection of 15 Photographs of or by Father Bernard Hubbard, "The Glacier Priest 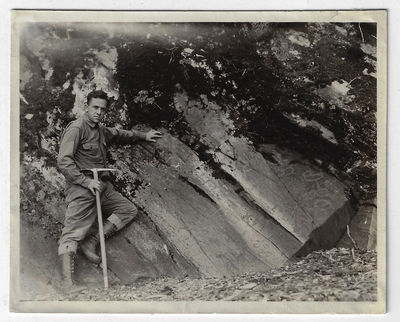 Very good. Fifteen black and white photographs, of which thirteen measure 4 7/8" x 3 ¾"; the other two measure 4" x 6". Four of the smaller size images have typed descriptions attached to them. Bernard R. Hubbard was a Jesuit priest, explorer, photographer, and lecturer who did much to familiarize Americans with the beauty of the Alaska and the lives of the region's native peoples. Born in San Francisco in 1888, Hubbard studied at several West Coast colleges and universities before heading to Austria, where he was ordained as a priest and also became enamored of the mountains. After seeing him head off on climbing expeditions in every spare moment, his fellow theology students dubbed him "Der Gletscher Pfaffer" (The Glacier Priest), a sobriquet he would adopt proudly for the rest of his days. Though his "day job" was head of the Department of Geology at Santa Clara University, for nearly 30 years Hubbard conducted annual summer expeditions to Alaska and the Arctic. He funded this work (and also supported Catholic missions in Alaska) by touring the country upon his return, delivering lectures--illustrated with photographs and film he shot himself--to large and enthusiastic audiences. Although his expeditions had scientific and anthropologic goals, scholars have generally pronounced them to be of little scientific consequence. Nonetheless, Hubbard had charm, showmanship, and photographic talent on his side. According to historian Mary Jane Miller (Screening Culture, p. 115), "Hubbard became a household name after his experiences and photographs were published in the Saturday Evening Post in 1932. By 1937, he was the highest paid lecturer in the United States." The photos colelcted here show Father Hubbard posed with his ice axe, examining pictographs, hiking with companions over glaciers and snow-covered terrain, posing with totem poles "found some distance back from the coast in south-east Alaska." Two images do not include people, but are beautiful shots of an unidentified Alaskan glacier and icefield. (Inventory #: 21379)
$125.00 add to cart or Buy Direct from Walkabout Books
Share this item

Boston, New York, Philadelphia, and Pittsburgh : E.A. Strout Company
(click for more details about The Great Peace Movement, Back to the Farm)

Journal of an Exploring Tour Beyond the Rocky Mountains, Under the Direction of the A. B. C. F. M. in the Years 1835, '36, and '37; Containing a Description of the Geography, Geology, Climate, Productions of the Country, and the Numbers, Manners, and Customs of the Natives: With a Map of Oregon Territory

Ithaca : Andrus, Woodruff, & Gauntlett , 1844
(click for more details about Journal of an Exploring Tour Beyond the Rocky Mountains, Under the Direction of the A. B. C. F. M. in the Years 1835, '36, and '37; Containing a Description of the Geography, Geology, Climate, Productions of the Country, and the Numbers, Manners, and Customs of the Natives: With a Map of Oregon Territory)
View all from this seller>