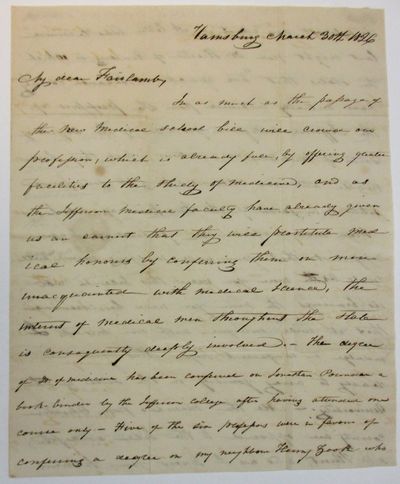 "My Dear Fairlamb, In as much as the passage of the new Medical school bill will crowd our profession, which is already full, by offering greater facilities to the study of medicine, and as the Jefferson Medical faculty have already given us an earnest that they will prostitute medical honours by conferring them on men unacquainted with medical science, the interest of medical men throughout the State is consequently deeply involved. The degree of Dr. of medicine has been conferred on Jonathan Pound a book-binder by the Jefferson College after having attended one course only. Five of the six professors were in favour of conferring a degree on my neighbour Henry Zook who is almost an idiot. A letter was received last night from Dr. Hiester of Reading in which he states that "two quacks in Lebanon county have actually received from the professors of the Jefferson College a promise of the Degree of Doctor of Medicine for exertions which they have made and are still making to send forward petitions in favour of the new medical school.
"From such dishonourable proceedings I am confident that your well judging mind will revolt. As the more you view this bill in all its bearings the more you will be convinced that it will interfere with our interest...." Harris urges Fairlamb to use his influence by urging Representative Hunt to oppose the bill.
Hon. William Harris [1799-1865], a civil engineer, was the son of James Harris, a Pennsylvania State Senator and cofounder of the town of Bellefonte. He was son-in-law of Dr. George Ashbridge Fairlamb [1784-1829]. Dr. Fairlamb received his medical degree from the University of Pennsylvania in 1808 and practiced medicine in Downingtown for many years. He also established The Independent Journal of Downingtown, a Jackson paper, with George Plitt in 1827. (Inventory #: 37211)
$375.00 add to cart or Buy Direct from
David M. Lesser, Fine Antiquarian
Share this item
David M. Lesser, Fine Antiquarian Books LLC
Offered by