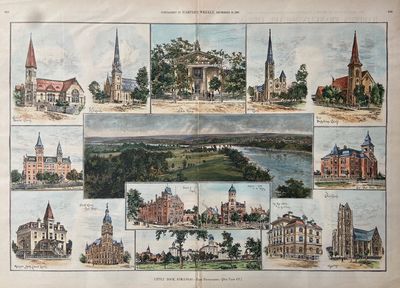 by HARPER'S WEEKLY
New York: Harper's Weekly, 1887. unbound. Woodcut. Image measures 13 1/2" x 9 1/4". This beautifully hand colored illustration, published as a supplement to the September 10, 1887 edition of Harper's Weekly, depicts various scenes of Little Rock, Arkansas. Drawn from photographs, the illustrations include Little Rock University, Pulaski County Court House, Philander Smith Colored Institute, the Board of Trade, Arkansas School for the Blind, the Insane Asylum, Second Baptist Church, First M.E. Church, Episcopal Church, the Presbyterian Church, The Catholic Church, Fort Steel Public School, the Post Office and US Offices, and the State House. In the center of the image is a bird's eye view of the city from across the Arkansas River. Harper's Weekly was a New York-based illustrated political magazine published from 1857 until 1916. The magazine featured foreign and domestic news, fiction, essays on many subjects, and humor. Its most well-known contributor was Thomas Nast, who made his career doing political cartoons for the publication. (Inventory #: 298198)
$135.00 add to cart or Buy Direct from
Argosy Book Store
Share this item