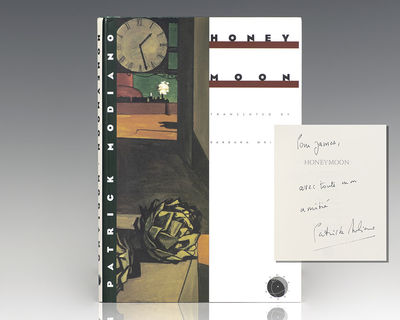 by Modiano, Patrick
Boston: Verba Mundi/ David A. Godine, 1995. First American edition of this "haunting tale of quiet intensity" (Review of Contemporary Fiction). Octavo, original half cloth. Presentation copy, inscribed by the author on the half-title page, "Pour James, avec toute mon amitie Patrick Modiano." Fine in a fine dust jacket. Jacket design by Louise Fili. Translated by Barbara Wright. A winner of France's prestigious Prix Goncourt and the Nobel Prize, Modiano is the author of 17 novels as well as the screenplay for Louis Malle's noteworthy film, Lacombe Lucien. In this slight but probing novel, a middle-aged man decides to take a "honeymoon." Scheduled to fly to Brazil on a job, documentary filmmaker Jean B. instead slips away to Milan and then returns to a Parisian suburb. There he attempts to trace the life and death (by suicide) of a woman named Ingrid, whom he met while hitchhiking to Saint-Tropez. World War II is raging, and Ingrid, who is traveling with her husband, clearly has something to hide. Ingrid's mystery is not rewardingly played out, but Modiano is a wonderfully evocative writer--there's a nice touch of menace throughout, and the cool, collected writing feels like a salve. (Inventory #: 118229)
$500.00 add to cart or Buy Direct from
Raptis Rare Books
Share this item