The Campaign in Tirah 1897-1898: An Account of the Expedition Against the Orakzais and Afridis under General Sir William Lockhart. Based (By Permission) on Letters Contributed to ‘The Times’. 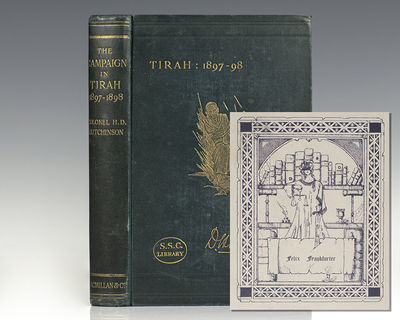 by Hutchinson, Henry Doveton [Felix Frankfuter]
London: Macmillan and Co., Limited, 1898. First edition of Hutchinson's important eye-witness account of the Tirah Campaign. Octavo, original cloth with gilt titles to the spine and front panel, gilt decorative vignette of an Afridi tribesman to the front panel, illustrated with 7 maps and plans, half-tone tissue-guarded frontispiece portrait of General Lockhart. In near fine condition. From the library of Supreme Court Justice Felix Frankfurter with his bookplate to the pastedown. Austrian-American lawyer and jurist Felix Frankfurter served on the Supreme Court from 1939 to 1962 and was a noted advocate of judicial restraint in the judgments of the Court. "Hutchinson's in-the-scene report offers a detailed account of the many skirmishes and battles which made up this campaign. In comparison to the letters of Churchill of the Malakand Field Force, Hutchinson grasped for detailed while Churchill sought the impression" (Riddick, 363). (Inventory #: 119903)
$400.00 add to cart or Buy Direct from
Raptis Rare Books
Share this item