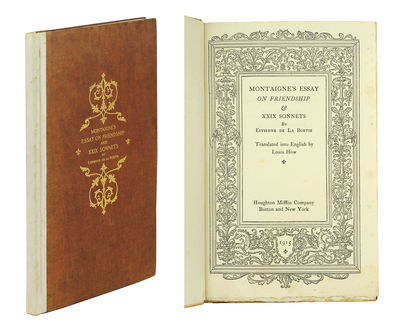 by Montaigne and Éstienne de La Boétie. Trans. by Louis How.
Slim 8vo. Boston: Houghton Mifflin, 1915. Slim 8vo, 63 pp. Quarter vellum with brown paper covered boards, decorated title stamped in gilt to upper and lower boards. Bookplate of Myra Lumbard Palache on front paste down and her name dated December 23, 1915 on front free endpaper. Preliminaries lightly foxed, vellum backstrip a little spotted, very good. § Number 277 of an edition of 450 printed by the Riverside Press. A sweet printing of Montaigne's famous Essay on Friendship, together with twenty nine sonnets by his great friend Éstienne de La Boétie. Montaigne is said to have begun writing his essays, and particularly his Essay on Friendship, after the early death of Éstienne de La Boétie left him without his preferred interlocutor. This attractive book was printed at a time when the First World War was raging on the other side of the Atlantic. (Inventory #: 106560)
$50.00 add to cart or Buy Direct from
John Windle, Bookseller
Share this item