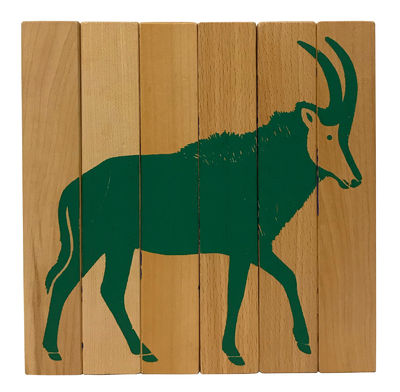 by Shapur, Fredun (designer)
Princeton: Creative Playthings, 1972. First American edition of this iconic educational toy, graphic designer Fredun Shapur's four-way blocks. Shapur developed the first version of these blocks, featuring four simplified, stylized animals, in 1964. They were awarded the London Design Centre label, and picked up by Naef, the Swiss toy company, for manufacture and distribution in Europe. In 1968, Shapur became art director of the American toy company Creative Playthings, where his vision informed every aspect of the company's image: "Attractive design, high standards of craftsmanship, and well-informed, age-appropriate goods were the qualities that made Creative Playthings an emblem of the 'good toy' as it was understood in the postwar years" (Fredun Shapur: Playing with Design, 61). He developed two new variations on the four-way blocks for Creative Playthings, one featuring wild animals, one farm animals. In the American blocks, the animals are depicted more realistically than in the earlier European version. These wild animal blocks, arranged and rearranged, reveal in turn a blue giraffe, a black zebra, a red cheetah, and a green antelope. A high spot of modern graphic design. Six wooden puzzle pieces, screenprinted in four colors, each piece measuring 7.5 x 1.25 x 1.25 inches. Copyright information printed at base of giraffe image. Housed in original box with tape repairs. (Inventory #: 1002784)
$250.00 add to cart or Buy Direct from Honey & Wax
Share this item
Honey & Wax Booksellers
Offered by

Ogura Hyakunin Isshu (Game of One Hundred Poets, One Poem Each)

Japan 1900
(click for more details about Ogura Hyakunin Isshu (Game of One Hundred Poets, One Poem Each))
View all from this seller>