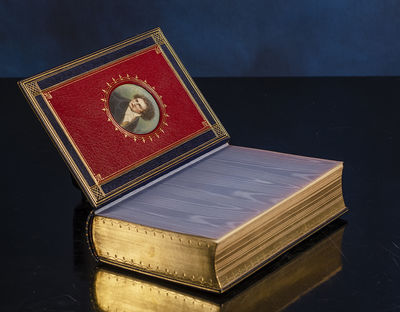 Ludwig van Beethoven (1770-1827) was a German composer and pianist whose music ranks amongst the most performed of the classical music repertoire; he remains one of the most admired composers in the history of Western music. His works span the transition from the classical period to the romantic era in classical music. His career has conventionally been divided into early, middle, and late periods. The "early" period, during which he forged his craft, is typically considered to have lasted until 1802. From 1802 to around 1812, his "middle" period showed an individual development from the "classical" styles of Joseph Haydn and Wolfgang Amadeus Mozart, and is sometimes characterized as "heroic." During this time he began to suffer increasingly from deafness. In his "late" period from 1812 to his death in 1827, he extended his innovations in musical form and expression.

Romain Rolland (1866-1944) was a French dramatist, novelist, essayist, art historian and mystic who was awarded the Nobel Prize for Literature in 1915 "as a tribute to the lofty idealism of his literary production and to the sympathy and love of truth with which he has described different types of human beings". He is also noted for his correspondence with and influence on Sigmund Freud. The first two volumes of his work on Beethoven Les Grandes Époques Créatrices were first published in 1928. (Inventory #: 04965)
$6,500.00 add to cart or Buy Direct from
David Brass Rare Books
Share this item

Flight of the Duchess, The

Campden, Gloucestershire: Essex House Press, 1905
(click for more details about Flight of the Duchess, The)
View all from this seller>