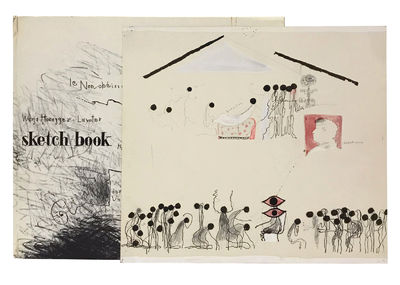 by Honegger-Lavater, Warja
Basel: Basilius Presse, 1968. First edition of Swiss artist Warja Lavater's dynamic panorama charting the development of painting in the West, from the prehistoric cave art of Pech Merle to Jackson Pollock. Originally a designer of corporate logos and trademarks, Lavater had a genius for the symbol, producing inventive artist's books constructed of minimalist graphic codes and keys. The visual narrative of Sketch...Book is a historical one, focused on the disruptive figure of the painter, the "Disobedient," who is represented by two eyes stacked on top of each other: "With his exterior eye he sees, with his interior eye he thinks." As the centuries and millennia rush by, populated by the flowing black dots who represent the Disobedient's contemporaries, we see glimpses of the painter's radical power of sight: Sumerian glyphs, the golden ratio, medieval illuminations, Renaissance perspective, modern abstraction, captured in flashes and fragments. "This story is history, because the visions of the painter become reality." Text in French, English, and German. Laid into this copy is the publisher's printed description of the book, and an original illustration by Lavater, dated 1967, featuring the Disobedient with his interior eye trained upon an enigmatic portrait of "the bad man," while the retired Roman general Lucullus lounges in the distance: this art does not appear in the published book. A fine copy of a representational tour-de-force, with original artwork by Warja Lavater. Single volume, measuring 8 x 9 inches: [88, double leaves]. Original glossy color pictorial boards, text block printed in black and orange. With publisher's description, single leaf measuring 5.75 x 8 inches, printed recto only. Lightest toning to boards, head of front joint lightly rubbed. With original illustration, measuring 8 x 8.75 inches, executed in ink, pencil, and gouache. Inscribed in pencil on verso: "To Tony! sketch...1967." Multiple pinholes at corners and top center of illustration. (Inventory #: 1002769)
$1,800.00 add to cart or Buy Direct from Honey & Wax
Share this item
Honey & Wax Booksellers
Offered by

Paradise Lost. A Poem in Twelve Books; with: Paradise Regain'd. A Poem in Four Books. To which is added Samson Agonistes: and Poems upon Several Occasions; with: Proposals for Printing by Subscription the Poetical Works of John Milton

Birmingham : John Baskerville , 1758
(click for more details about Paradise Lost. A Poem in Twelve Books; with: Paradise Regain'd. A Poem in Four Books. To which is added Samson Agonistes: and Poems upon Several Occasions; with: Proposals for Printing by Subscription the Poetical Works of John Milton)

New York : Simon & Schuster , 1993
(click for more details about Harriet and the Promised Land)
View all from this seller>