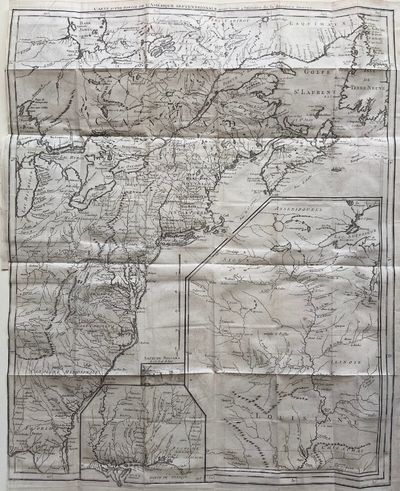 by SOULES, Francois
Paris: Chez Buissant, 1787. Georges Louis Le Rouge. Map. Engraving with outline hand coloring 24 x 19 1/2 inches, folded as issued, margin trimmed on left side, some light toning and stains Detailed map of the colonies and Canada with 3 insets of the Mississippi River watershed and the northern border of the Gulf of Mexico, and a tiny view of Niagara Falls. Indigenous territories are named througout. From a French perspective on the Revolution from 1774 to 1783, especially French and Spanish participation in the war. George-Louis Le Rouge (1712--1780) was a German mapmaker who set up in Paris as a publisher, compiler, and editor of maps. An enthusiastic Anglophile, he dedicated much of his time to translating English maps and books into French. Throughout his prolific career, he produced thousands of maps within a wide range of subjects, including city and town plans, atlases, plans of military campaigns, and sea charts. "From Histoire des Troubles de L'Amerique Anglaise, ecrite sur les memoires les plus authentiques". (Inventory #: 298378)
$1,200.00 add to cart or Buy Direct from
Argosy Book Store
Share this item