Travel and Adventure in the Territory of Alaska,; Formerly Russian America - Now Ceded to the United States - And in Various Other Parts of the North Pacific 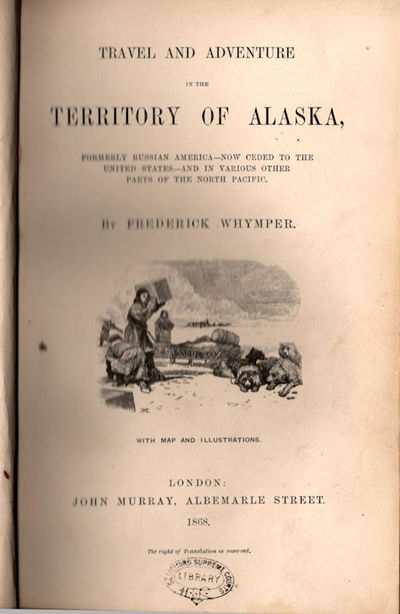 by Whymper, Frederick
London: John Murray, 1868. First Edition. Very Good. [8.75x6in]; xix, [1], 331 pp., frontispiece of Auroral light, title page vignette of loading a sledge, 34 illustrations on plates or in text, appendices, after last page, fold out map of the Yukon or Kwich-Pak river with insert of North Pacific Ocean [11.375x18.125in]; Contemporary 3/4 calf with marble paper on covers, five embossed ruled lines on spine with gilt lettering on black leather label, light blue end papers, all edges trimmed with red ink speckling; Some shelf wear to covers, edges and corners, surfaces rubbed, edges worn and corners bumped and worn through, top edge darken with soiling, general light age toning of text, light half circle stain on frontispiece, prior owner pencil corrections p. 165 and 311, small Solicitor's Supreme Court Library [Scotland] black ink stamps on verso of frontispiece, title page and xix. [Wickersham 6030, Ricks p. 255, AB 19424]. Frederick Whymper (1838-1901), a British artist, writer, traveler and explorer, was well known for his paintings. In 1862, he traveled to British Columbia to work and travel in the Pacific Northwest. He returned to England in 1867 and wrote this book on Alaska. It was first published in London in 1868. He went back to San Francisco to work on the Alta California newspaper for several years. On returning to England again, he wrote several more books on travel and adventure of the arctic and the Seas. Little was known about the interior of Russian America when the United States purchased it in 1867. The Russian experiment with in early 1800's to colonize of Alaska and extending down west coast to California was a failure. The Mexican-American war and discovery of Gold in California allowed the United States to expand to the west coast. Great Britain also expanded their influence in British Columbia and became a threat to the Russian-American Company colonies in Alaska. Tsar Alexander II decided to sell Alaska to America rather than defend against an invasion by Great Britain. Secretary of State William Seward saw an opportunity to expand trade and influence in Asia with the purchase of Alaska. (Inventory #: 13492)
$403.00 add to cart Available from
David Spilman Fine Books
Share this item