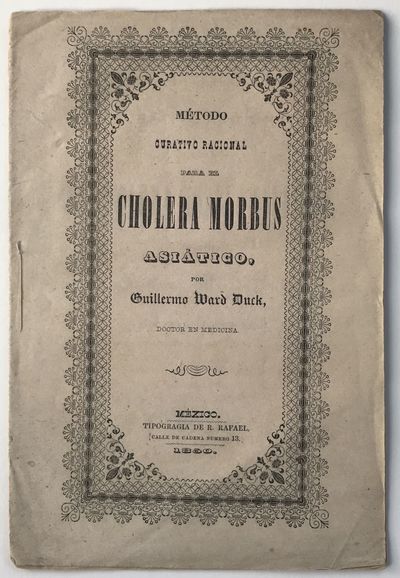 by Duck, William Ward
Mexico City: R. Rafael, 1850. Very good.. 16pp. Original printed wrappers, stitched as issued. Slight splitting of wrappers at spine ends, light wear and soiling. A scarce work on cholera, published in the wake of the Mexican-American War. The author identifies himself as a retired medical doctor, and he proceeds to explain how to diagnose cholera, his "rational" method for curing it, and suggestions for easing a patient's recuperation. At the end of the work he provides recipes for the various medicines and tonics he prescribes, noting that he would not profit on human suffering like some others. Cholera became a serious problem in Mexico City and several other locales following the Mexican-American War. A scarce work, not in Palau. We locate a handful of copies located in OCLC.
Sutro 858. (Inventory #: 1727)
$850.00 add to cart Available from
McBride Rare Books
Share this item

Hartford : Hartford Publishing Co , 1884
(click for more details about The Lives of James G. Blaine and John A. Logan. Republican Presidential Candidates of 1884..)

[Fort Stockton, Tx.] 1965
(click for more details about Authentic Indian-Mexican Recipes)
View all from this seller>