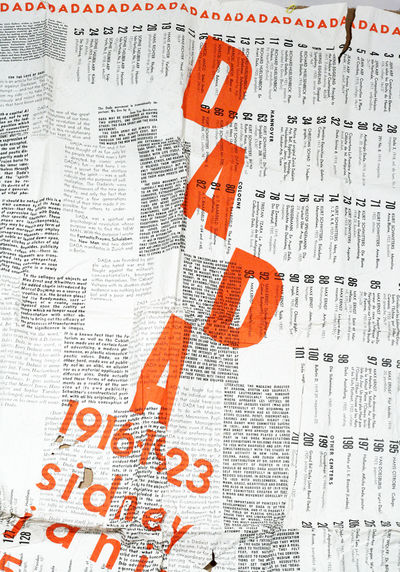 by DUCHAMP, MARCEL; JANIS, SIDNEY
New York: Sidney Janis Gallery, 1953. First edition. Custom box. Very Good. DUCHAMP'S FAMOUS "CATALOG" FOR THE CELEBRATED 1953 DADA RETROSPECTIVE. "Duchamp planned, organized, and installed a major historical show of international Dada at the Janis Gallery in 1953. More than two hundred works of art and documents were on view, each one identified in a Duchamp-designed 'catalog' that was itself pure Dada - a tissue-thin broadsheet with written texts (by Jean Arp, Richard Huelsenbeck, Jacques-Henri Lévesque, and Tristan Tzara) in contrasting typefaces, set in narrow columns that ran diagonally down the page. When the sheets were delivered to the gallery, Duchamp took one, crumpled it up into a ball, and told Janis to mail it as it was, and Janis did so, to the confusion of numerous art lovers who wondered why they were being mailed trash. (A wicker basket of crumpled catalogs stood beside the gallery door at the opening.)

"Duchamp was represented in Janis's Dada show by four works: Tu m', his last painting on canvas; To Be Looked at (from the Other Side of the Glass) with One Eye, Close to, for Almost an Hour, the glass study he had done in Argentina; the ready-made Fresh Widow; and Janis's replica of Fountain, installed over the door at the entrance, with a sprig of mistletoe dangling from its inverted bowl." (Calvin Tomkins, Duchamp: A Biography, 378-9).

New York: Sidney Janis Gallery, 1953. Single sheet of paper, 25x38 inches (96.5x63.5 cm). Since the sheet was originally crumpled into a ball, there are many creases and a few internal tears; extreme top left with border torn away. Now folded and housed in custom cloth box and chemise.