Letter from a Schoolteacher to His Cousin with Great Illustrations [Ohio, 1871] 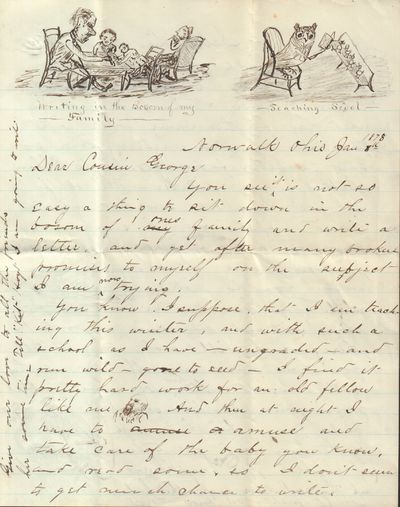 by M[esnard], Luther B[aker]
Very Good. 1871. An amusing letter with great drawings by the author, Luther Baker Mesnard written to his cousin George. Headline reads "Norwalk Ohio Jan 8th 1878." The envelope is not included. The letter is fairly easy to read and drawings reflect the text. Letter has light soiling, else very good. This letter was written by Luther Baker Mesnard (here signed Luther B. M.) of Norwalk, Ohio. He was a schoolteacher, surveyor and Captain in the 25th Ohio Volunteer Infantry in the Civil War. He writes to his cousin George; we believe this to be George Luther Hoyt, related to Mesnard on his mother's side. Mesnard writes about being a schoolteacher, "you know I suppose, that I am teaching this winter and with such a school as I have - ungraded - and run wild - gone to seed - I find it pretty hard work for an old fellow like me" [here he draws a portrait of an old man]. At the top of the letter he draws an owl sitting on a chair teaching little ducks on bench, labeled "teaching school." And a separate drawing captioned "writing in the bosom of my family" with Mesnard surrounded by children. On the second page of the letter are two illustrations depicting his cousin George's accident or "disaster." Mesnard writes "I also saw a letter from coz. Ed to Ellen stating your disaster - Well really it must have been very bad indeed - indeed awful - but I suppose you have no lack of sympathy and possibly some of it comes in a way you do not like" [here he draws a man laid up on a couch with a broken leg and four people fussing about him]. There is another illustration nearby that depicts a man standing in front of a cart with his leg propped up and a dead pig being pushed off a cart by a group of devils; could this mean a slaughtered pig fell off a cart and crushed George's leg? Mesnard also mentions that Harriet (his wife, Harriet Mesnard née Baker) suggests that George write to Alvin in San Lorenzo, California (we believe this be Alvin Baker). Mesnard goes on to tell George of a robbery at the express office, Thanksgiving with the family, and reminiscences of when they were boys. A fun letter to peruse and research. ; 7 3/4" x 9 3/4"; 4 pp . (Inventory #: 022041)
$65.00 add to cart Available from
Back of Beyond Books
Share this item

Tour on the Prairies