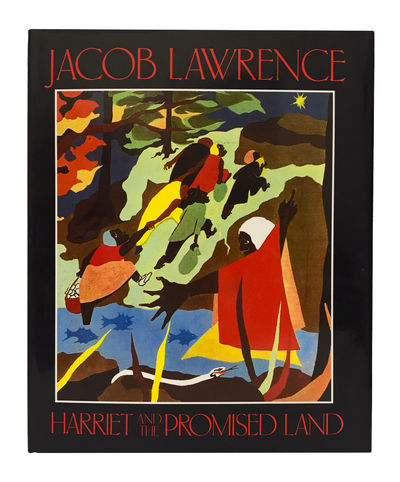 by Lawrence, Jacob; [Tubman, Harriet]
New York: Simon & Schuster, 1993. First edition thus of Jacob Lawrence's tribute to Harriet Tubman, featuring a new preface by the artist, and signed by him in the year of publication. First issued in 1968, Harriet and the Promised Land tells the story of Tubman's work on the Underground Railroad through a series of vibrant paintings captioned in verse: "They slept in a barn / With the barnyard fowl. / And Harriet kept watch / Like a barnyard owl." For this 1993 reissue, dedicated "to the courageous women of America," Lawrence contributed a new preface: "Given the opportunity to select a subject from American history, I chose to do a number of paintings in tribute to Harriet Tubman, a most remarkable woman, and in so doing also to pay tribute and honor to my late mother, Rosalee, and to my wife, Gwen." A fine signed copy. Single volume, measuring 11.5 x 9 inches: [36]. Original glossy color pictorial boards, orange endpapers, original unclipped color pictorial dust jacket. Color illustrations throughout text. Signed and dated 8/93 by Jacob Lawrence on half-title. (Inventory #: 1002812)
$850.00 add to cart or Buy Direct from Honey & Wax
Share this item
Honey & Wax Booksellers
Offered by

Paradise Lost. A Poem in Twelve Books; with: Paradise Regain'd. A Poem in Four Books. To which is added Samson Agonistes: and Poems upon Several Occasions; with: Proposals for Printing by Subscription the Poetical Works of John Milton

Birmingham : John Baskerville , 1758
(click for more details about Paradise Lost. A Poem in Twelve Books; with: Paradise Regain'd. A Poem in Four Books. To which is added Samson Agonistes: and Poems upon Several Occasions; with: Proposals for Printing by Subscription the Poetical Works of John Milton)