The Challenge of World Communism [*SIGNED*] 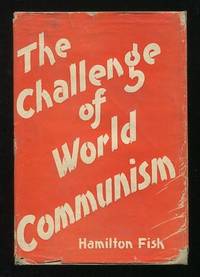 by Fish, Hamilton
Milwaukee: The Bruce Publishing Company. Very Good+ in Good dj. (c.1946). First Edition. Hardcover. [moderate shelfwear to bottom edge, slight deterioration to cloth at base of spine; jacket is heavily edgeworn and a bit soiled, with some paper loss at corners of front panel, spine ends, and mid-spine]. INSCRIBED and SIGNED by the author on the front endpaper: "To Arthur Holliday / with best wishes / Hamilton Fish / Sept 23rd 1946." "With the Red menace daily more and more formidable, this statement comes as a timely document. 'To fight Communism by telling the truth' is the author's avowed purpose." Fish (actually Hamilton Fish III, but sometimes known as Hamilton Fish, Jr.) knew the territory, all right: in a quarter-century as a U.S. Congressman (1920-1945), he was a staunch opponent of FDR's New Deal and an even more fervent anti-communist. As early as 1930, he was beating that drum, initially as chairman of the Special Committee to Investigate Communist Activities in the United States (which he had been instrumental in establishing). A direct precursor to the more famous House Committee on Un-American Activities (HUAC), the Fish Committee took its show on the road, holding hearings in many major cities across the country in the 1930s. He was also known to have distributed anti-semitic literature out of his Congressional office, and initially took a strong isolationist position with regard to World War II, advocating for better relations with Nazi Germany. Shortly before publishing this book, he had finally been voted out of Congress, and blamed his defeat on "Communistic and Red forces from New York City backed by a large slush fund." Signed by Author . (Inventory #: 26174)
$75.00 add to cart Available from ReadInk
Share this item
ReadInk
Offered by

by Needham, Jane Boyle, as told to Rosemary Taylor