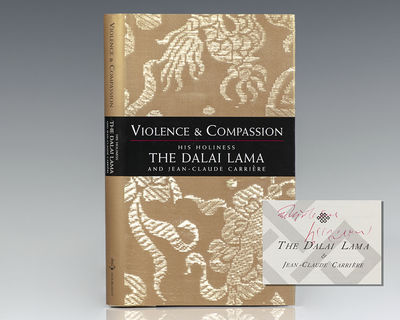 by His Holiness The Dalai Lama and Carriere, Jean-Claude
New York: Doubleday, 1994. First edition of French film writer Jean-Claude Carriere's conversations with His Holiness the Dalai Lama. Octavo, original half cloth. Signed by His Holiness the Dalai Lama on the title page. Very good in a fine dust jacket. Library stamps to the page edges and unnecessary tape remnants to the pastedowns. Jacket design by Kathy Kikkert. Jacket photograph by Paul Coughlin. For many people throughout the world, no other figure more embodies the heart of Buddhist compassion than His Holiness the Dalai Lama. French film writer Jean-Claude Carriere's conversations with the Dalai Lama cover the various issues and problems that challenge world civilization in the 21st century - including women's rights, education, terrorism, the population explosion, environmental dangers, and organized violence. (Inventory #: 119044)
$600.00 add to cart or Buy Direct from
Raptis Rare Books
Share this item