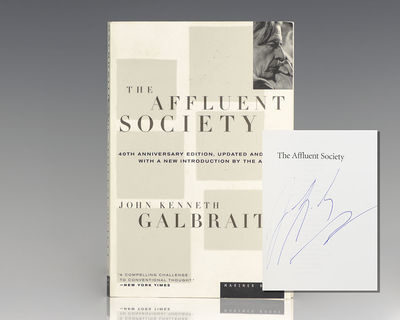 by Galbraith, John Kenneth
Boston: Houghton Mifflin Company, 1998. First edition of the 40th anniversary of the economist's landmark work. Octavo, original illustrated wrappers. Boldly signed by John Kenneth Galbraith on the half-title page. In near fine condition. John Kenneth Galbraith's breakthrough as a best-selling author came with "The Affluent Society" for which he was honored with the American Economic Association's prestigious presidency. The book also influenced both the Great Society program and the rise of the American "counterculture" in the 1960's. Listed on Modern Library's 100 great nonfiction books of the twentieth century. Galbraith's ideas often addressed the influence of the potential market power of large corporations (Dunn and Pressman, 2005). He believed that corporations could become price makers, rather than price takers, by weakening the accepted principle of consumer sovereignty (Galbraith, 1970). This, in turn, allowed corporations to efficiently increase the production of their goods. (Inventory #: 118388)
$100.00 add to cart or Buy Direct from
Raptis Rare Books
Share this item

New York : Little, Brown and Company , 2005
(click for more details about Searching for the Sound: My Life with the Grateful Dead.)

Hartford : American Publishing Company , 1876
(click for more details about The Adventures of Tom Sawyer.)
View all from this seller>